Before the Battle of Armageddon

Each members possess their own unique and lethal fighting techniques
Cunning

Win the Battle of Armageddon.

Defeat the Forces of Light.
Grasp the god-like power of Blaze.

The Forces of Darkness is a gathering of evil (and sometimes neutral) aligned warriors in the game Mortal Kombat: Armageddon. They are the opposing army that clashes with the Forces of Light in the Battle of Armageddon. This army consists of about 35 warriors.

In the intro sequence of the game, and in the final moments of its Konquest mode, two armies, the Forces of Light and the Forces of Darkness, do battle in the south lands of Edenia. They are interrupted by the rising of the fabled Pyramid of Argus, and atop it is Blaze. The two armies now race to the top, each individual hoping to defeat the fire-elemental. The winner would obtain immense power from the elemental being.

Each character's ending in the game is what happens if they were the one to defeat Blaze and take the prize for themselves. In the game, it is shown that Shinnok is partially responsible for the large amount of warriors, as he spreads the word of Blaze and the prize to other kombatants. In Outworld, Taven, searching for Quan Chi, listens in on a conversation between the Netherrealm sorcerer, Shang Tsung, Onaga and Shao Kahn. They are discussing an alliance, though it is a shaky one, as they are all evil and betrayal is to be expected. Quan Chi convinces his bitter enemies to stand together, at least initially, and when the Forces of Light are destroyed, they'll see which evil triumphs over all of the others.

It is interesting to note that there are more warriors in the Forces of Darkness than on the side of Light. However, there is a notable amount of them who simply joined to get closer to their true enemies. A good example of this is Nitara. Whilst she herself is morally neutral, she joined the Forces of Darkness in order to defeat Ashrah, who had been slaying many of her people, the Vampires. Another example is Scorpion, who is neutral because of his continuing animosity towards Quan Chi. He joined the Forces of Darkness to try and catch the sorcerer off guard but unfortunately ended up squaring off against his former nemesis, Sub-Zero.

In the first timeline, all members perished except Shao Kahn and Shinnok, against the only living Force of Light: Raiden. The Forces of Darkness ceased to exist in the second timeline. 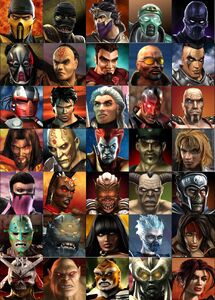 All members of the Forces of Darkness.
Add a photo to this gallery

Retrieved from "https://villains.fandom.com/wiki/Forces_of_Darkness?oldid=3889365"
Community content is available under CC-BY-SA unless otherwise noted.