Take over Liberty City's underworld and knock out its rival gangs out of competition (succeeded).

Forelli Family associate Tommy Vercetti, who was sent by his friend Sonny Forelli to kill a key mobster but ended up killing eleven men in Harwood, Liberty City earning him years in prison and the nickname "The Harwood Butcher". This was later revealed in Vice City as a setup by Don Sonny Forelli.

By 1986, the Forelli family were the most powerful Mafia family in Liberty City. In GTA Vice City, the Forellis had decided to expand "down south" by opening relations with local drug cartels through recent ex-con and former Forelli associate Tommy Vercetti. However, this never happened due to Sonny Forelli's death and Tommy's defection. Giorgio Forelli faced charges for fraud, but is aquitted due to Tommy's interference.

In GTA San Andreas, it was agreed the Forellis would own an equal share of Caligula's Palace casino in Las Venturas, along with the Sindacco and Leone families. The Families couldn't decide between themselves who should run the casino. Therefore, Ken Rosenberg was put forward as a neutral party, which any war between the families ignite, Rosenberg will be killed.

While Johnny Sindacco is at the hospital for being traumatized, the Forellis decide to take the moment to kill him, by hijacking his ambulance. Rosenberg becomes aware of the hit, and sends Carl Johnson to retrieve Johnny's ambulance before a war is ignited between the families. However, Johnny later dies from an induced heart attack, and Salvatore Leone returns to Las Venturas to reclaim the money that he invested in the casino from Rosenberg. The Forellis later send hitmen to kill Salvatore, who was aware of the hit and decides to send Carl to kill the hitmen in their flight before they arrive in Las Venturas. The hit leads to Salvatore to strike back by sending Carl to Liberty City, to kill Forelli members while at the Marco's Bistro.

In GTA Liberty City Stories, the Forellis deal with the death of Mayor Roger C. Hole, who was working for Franco Forelli the leader of the Forellis at the time. He then had found another representative, Miles O'Donovan, to go against Donald Love, who was representing the Leone Family. However, O'Donovan wins as the voters found out that Love was unfit for office because he was working with Toni Cipriani.

The Forellis later target the Yakuza, after Kazuki had taken over most of the territory in Liberty City and began stocking up on powerful weapons such as a tank. The Forellis catch Kazuki's wife Toshiko Kasen attending the Fort Staunton Opera House with Toni Cipriani, and attempt to kill her (not knowing that Toshiko is against her husband's plots). The Forellis are later completly weakened after their main base of operations Fort Staunton was destroyed by underground explosives in the old subway main line running throught southern Staunton Island.

In GTA III, they are named the Forelli Brothers. The Forellis seems to have been weakened considerably, with the killing of several more Forelli members.

A high-ranking member Mike Forelli, was killed in a car explosion by a bomb that was set by Claude, on orders from Joey Leone. Bad blood between Joey and the Forelli brothers continue, to which Joey had another Forelli killed and stuffed in a car. Due to the Forelli surveillance around the vehicle, Joey sent Claude to dispose of it at the Harwood Autocrusher and Junkyard.

It's unknown what happens with the Forellis after the deaths of Mike and the unnamed Forelli, but it's presumed that it will only be a matter of time before the other Liberty City mafia families manage to wipe them out of Liberty City once and for all due their current heavily weakened state. 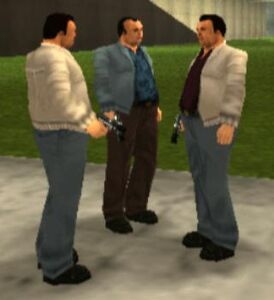 Retrieved from "https://villains.fandom.com/wiki/Forelli_Family?oldid=4049601"
Community content is available under CC-BY-SA unless otherwise noted.