Villains Wiki
Register
Don't have an account?
Sign In
Advertisement
in: Organizations, Doctors and Scientists, Oppressors,
and 23 more

Materials that could resist Burnish fire

Do experiments on the Burnish to power the warp drive.

Escape Earth with an amount of humanity and leave everyone else to burn (both failed).

The Foresight Foundation are the main antagonistic faction of the 2019 film Promare. They are an organization founded by Kray Foresight to oversee experiments on the Burnish. They also captured Burnish and drained them into a warp drive to transport an amount of people to another planet powered by the titular aliens.

The Foresight Foundation was founded by Kray Foresight before the events of Promare. They started to oversee the experimentation and research of the Burnish, humans bestowed with enchanted flame powers by the Promare. In the public's eye, they are known for the pharmaceuticals, ice weaponry for Mad Burnish attacks, and scientific research.

The Foundation specialized in kidnapping, jailing and other forms of oppression towards the Burnish so that they could be experimented. While the Foresight Foundation continued their biddings, they were unaware that the rising magma level was being raised by inflicting pain onto the Promare, as the Burnish have the ability to communicate with them. Because of this, Kray had invented a warp drive that could transport a number of people to another planet, but it was powered by the Promare, meaning that the Foresight Foundation had to drain the captive Burnish to the point of near death.

The organization is most likely disbanded after the arrest of their leader Kray Foresight and the fact that Galo and Lio chose to free the Promare, causing the Burnish to become normal humans. 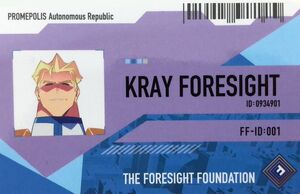