Strength:
Control over his ship

Defeat Jotaro and his group (failed).

Forever is one of the mercenaries hired by DIO and a minor antagonist in JoJo's Bizarre Adventure: Stardust Crusaders. He wields the Stand known as Strength.

In Japanese, he was voiced by Mitsuaki Madono in JoJo's Bizarre Adventure: Heritage for the Future and Kappei Yamaguchi in the anime. In English, his voice actor goes uncredited in the anime.

Forever is a big orangutan who is the captain (and the only crew member) of a huge freighter ship named "Big Daddy". He attacks Jotaro's group in the South China Sea, after they escaped from the ship of Impostor Captain Tennille, by "inviting" them to his ship. They all look around the ship for the crew members, but only find the orangutan inside a cage.

Forever attacks Jotaro by making pieces of the ship fly towards him, trapping him in the wall. Jotaro then picks a button of his jacket and drops it.

As Forever picks it, Jotaro uses the finger of his stand to shot the button, which hits Forever's head. The orangutan then show his belly, as a sign that he gives up, but Jotaro punches him into oblivion, making the ship sink and forcing everyone to leave the same way they entered the ship.

Forever's Stand, Strength, takes the form of a huge freighter ship. He controls every aspect of the ship, being able to walk through the walls, and to even control all parts of the ship at will, making them move or to fly towards a target. 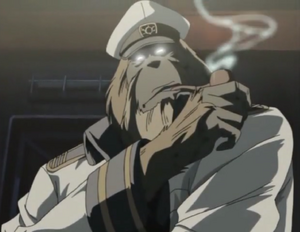 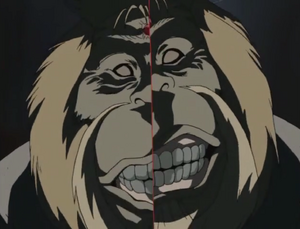 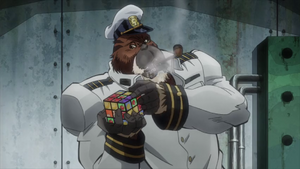 Forever playing with his Rubik's Cube. 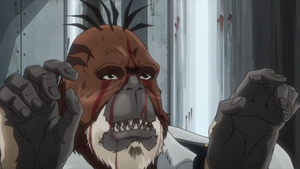 Forever attempting to surrender to Jotaro. 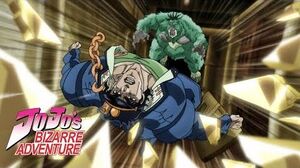