Fortitudo, the Cardinal Virtue of Fortitude and the Bringer of Flame, is an enemy boss in Bayonetta, one of the Auditio seeking to recover the Left Eye and revive Jubileus the Creator. He is the first Auditio to be encountered and fought in a Boss chapter (and only one to be fought outside a boss arena as a miniboss).

Fortitudo appears more again to taunt and persuade Bayonetta to assist them in reviving The Creator. After exchanging insults with the witch, Fortitudo vanishes to leave Bayonetta to her fate.

Bayonetta escapes on a floating chunk of masonry and attacks once more. Fortitudo attempts to use his bulk and his tail to defeat the witch. However, Fortitudo makes the fatal mistake of lashing out with his tail, as Bayonetta simply grabs his tail and flings him into the distance. With Fortitudo stunned, Bayonetta summons a demonic bird of prey named Malphas. Malphas then proceeds to jab at Fortitudo with its beak before tearing a hole through Fortitudo's face. Bayonetta then shatters the floating parts of the colosseum, strikes the loose debris toward Fortitudo, then deactivates her Witch Time. The debris, freed from Witch Time, fly toward Fortitudo with frightening velocity before striking him. The multiple blows are too much for Fortitudo and he is left mortally wounded. 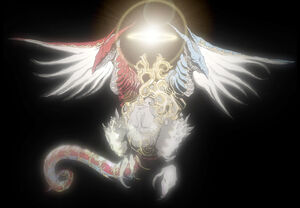 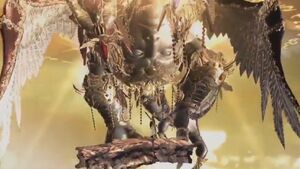