Aladdin and the King of Thieves

Find the lost Hand of Midas.

The Forty Thieves are the titular secondary antagonists of the 1996 Disney animated film Aladdin and the King of Thieves.

The Forty Thieves are a villainous group of greedy, thieving, and avaricious bandits led by their chief Cassim (Aladdin's biological father) and his second-in-command Sa'Luk where they stole lots of treasure given as gifts for Aladdin and Jasmine during the wedding. Despite their uncharitable and ruthless behavior using weapons to steal, they are not seen inflicting any physical harm against innocent people, as Cassim himself already wrote up a new rule in their code while becoming their leader: never harm the innocent, in which thieves would have to keep to stay in touch with their group.

There were originally 40 thieves hence the name Forty Thieves, however due to the betrayal of Sa'luk, who informed the location to Razoul after being "replaced" by Aladdin during a confrontational fight between them, 31 of the thieves got arrested while seven of them managed to evade them. The 31 thieves vow that Sa'luk will pay for selling them out, even when Sa'luk closes the door on them. Upon returning to the hideout, Sa'luk then convinced the remaining seven thieves that it was Cassim who was responsible for betraying them and convinced them to mutiny against him.

Eventually, in an act of justice during the climax, Sa'Luk ended up being turned to a golden statue by the Hand of Midas as punishment, as well as the seven thieves having turned their boat into solid gold, sinking the boat, leaving them alone in the middle of the seas with no boat to return to shore. It was unknown if they survived or not.

The Thieves inside their camel baskets. 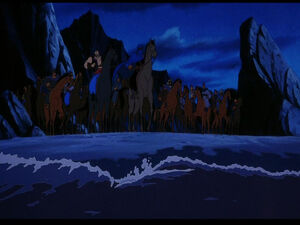 The Thieves on horseback before their lair. 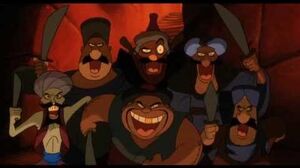 Aladdin & The King of Thieves - Welcome To The Forty Thieves (1080p) 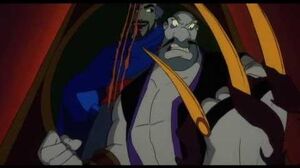