Robotic Henchmen
The X Guardians, also known as the Four Guardians, are major antagonists in the Mega Man Zero, being in the first two games. Created from the DNA of Mega Man X, they are Copy X's henchmen.

The Four Guardians' members consist of Harpuia, Leviathan, Fefnir, and Phantom. They are extremely strong warriors and commanders, and rule the city alongside the Eight Gentle Judges and Copy X. Each of them uses a Shining Weapon and can transform into their Armed Phenomenon form. Originally made to heal the world from war, their plan turned into a need to protect Neo Arcadia when the Resistance was formed. They originally had the upper hand, but Zero manages to defeat them, storm Neo Aracdia, and kill Copy X. Later, Harpuia then becomes Copy X's substitute, covering his death.

One year after this, Harupia does some good by saving Zero, but they still are allied with Neo Arcadia to stop Elpizo's evil scheme. Harpuia once again tries to kill Zero only to fail, and the other three Guardians were influenced by the Baby Elves to fight Zero, where they fail once more.

Two months after this, the guardians once again team up to defeat Omega, but they are required to retreat after Fefnir and Leviathan gets seriously injured. Harpuia tries to fight Zero once more, but their duel is interrupted by Dr. Weil and Copy X, the latter being revived and desires to control the Dark Elf. Harpuia rejects Weil's and Omega's return, but Copy X decides to brush it off at not being official, and later changes their control to Weil after the four's lack of success. When Neo Arcadia has a residential district wrecked due to them searching for the Dark Elf, Harpuia attacks Omega, only to be defeated by him.

As Zero fights both the mad doctor and the faux X, the three join up with the real X and Phantom's spirit. The other three join in the fight against Omega, and sacrifice themselves to protect Zero from Omega exploding on his defeat. 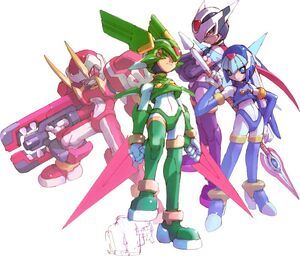