Assist Mother Miranda in reviving her daughter through a ceremony

Stop Ethan from stopping the ceremony (both failed)

The Four Houses is the main antagonistic faction of Resident Evil Village. They are a group of four ancient noble families that formed an alliance in ruling over a village in Eastern Europe. The alliance was eventually taken over by Mother Miranda, who became their ruler and mutated the latest descendants of the nobles as part of her experiments with the Megamycete.

The Four Houses descend from a group of mutants that ruled an underground city with the names Berengario, Cesare, Guglielmo and Nichola. Their current legacies are the Beneviento, Dimitrescu, Heisenberg and Moreau families. Sometime after the Spanish Flu, Mother Miranda came along and claimed herself to be a prophet of the "Black God", which as a powerful fungus. Mother Miranda experimented with the mold on many children, including that of the Four Houses. These were in an attempt to revive her fallen daughter. In the end, only Alcina Dimitrescu, Karl Heisenberg, Salvatore Moreau, and Donna Beneviento survived. None of them would be suitable to serve as a host body for Eva. From 1950 to 2021, Miranda's rule remained over them and thus over the region.

Castle Dimitrescu is an old castle that is home to the Dimitrescu dynasty. Both the house and the dynasty revolve around themes of Vampires and bats. It inhabitants consist(ed) of Alcina Dimitrescu, Bela Dimitrescu, Cassandra Dimitrescu, Daniela Dimitrescu, and Mother Miranda. It is at this location where Miranda experiments on her victims. People fear this place because Alcina will often take in innocent townsfolk and use their blood to sustain herself. Alcina did not always live here, until she inherited the manner for herself.

House Beneviento is an old mansion. It is inhabited by the secluded Donna Beneviento and her dolls, her most loyal being Angie. Over the years, this home's inhabitants became slimmer and slimmer as they were used as experiments by Mother Miranda. Eventually, Donna became it's only inhabitant, and inherited the doll-making business. In addition, she possesses chemicals that cause whoever falls victim to them to experience hallucinations.

Moreau's Reservoir appears to be a collection of old broken down aquatic-related structures. This house is themed after fish and other marine life. Salvatore Moreau was the only inhabitant of his house. This house is located in an old fishing village. Moreau ended up building a dam so that the river would flood the town. This would allow for his body to move around it, and for him to consume nearby fisherman.

Heinsenberg's factory is a massive factory that is located on the outskirts of a village in Eastern Europe. This house consists of industrialized weapons and gears that fit make up it's overall theme. Heisenberg is it's ruling inhabitant, the others being undead that were brought to life with Cabou parasites. Heisenberg ruled over this factory with an iron fist, planning to make a team of bio-engineered warriors to overthrow Mother Miranda.

The role of these characters in the game was to serve Mother Miranda in preforming a ceremony to help revive her former daughter Eva. They were going to do so by using the Ethan's daughter, Rose. They eventually kidnapped Ethan and it was decided that Heisenberg would decide his fate, but there was protest between him and Alcina. Each House held onto a flask pertaining to Rose, and Ethan had to visit each of them in order retrieve each individual flask. As he went to each house, he fought each of the heads, all of them (except for Donna) mutating into monstrous forms in an attempt to stop him. Despite their best efforts, they were unable to defeat him, and their legacies ended up coming to an end. 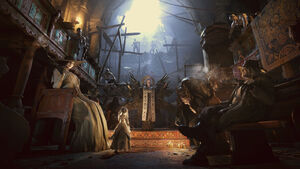 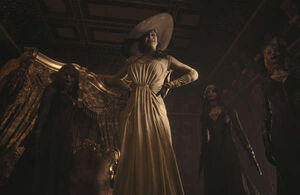