Being with Kamille Bidan.

Get back her memory and have a normal life.
Be free from Titans and be with Kamille.

Four Murasame is a Cyber-Newtype Mobile Suit pilot serving in the Titans and a major antagonist in the anime series Mobile Suit Zeta Gundam. She also appears in many video games of the Gundam and Super Robot Wars franchise, often as an optional recruitable character.

Due the effect from modification to made her become "Cyber-newtype" and erase her memories, Four is known very unstable and has fits of insanity that drives her to kill everyone with the Psyco Gundam. She also doesn't like someone who call her "Number 4" , tell about her past or someone tell anything about memory toward her. But strangely, she openly tell about this to Kamille Bidan at their date, who she at the first time join at opposite side.

Beside this, Four actually a kind girl, who wanted to get her memory back and become full-fledged normal person than a killer machine. She admitted to Kamille that she can feel become a "different person" whenever she piloting a Psyco Gundam without any memories. After meeting with Kamille, they are become a lover and always wanted to with him. At the end, she decide to go with Kamille before she unable to force against him due her brainwashed by the Titans, and ultimately sacrificed herself to protect him from Jerid Messa attack, and die on his arm.

After the One Year War, the young girl who would become Four Murasame lost her family, and after spending an unspecified time as a war orphan she was adopted by the Murasame Research Lab. It was there were the Federation used and trained her to become an artificial Newtype (or "Cyber - Newtype"). The scientist in charge of the project erased all her memories from her previous life and just gave her number 'Four' as the name.

Namika Cornell, the nurse in charge of her, convinced her that working with the Titans and fighting the AEUG was the only way that she had to recover her memories. Not only that, but despite obtaining huge psychic powers and mecha piloting skills, she also suffers enough brain damage to sustain very painful headaches that can only be eased by powerful medication.

After escaping from Kennedy Space Center, Karaba's flagship, the Audhumla reached New Hong Kong for supplies. It was in this place where she went for a stroll despite her orders and met AEUG pilot Kamille Bidan. She introduced herself to Ben Wooder, her new captain and given a mission to hunt Gundam Mk-II with her Psyco Gundam.

However, the mission is run quickly and she decide to retreat due Four become sick and ended being scold by Captain Wooder. Angered, Four decide to leave Audhumia and go to Hong Kong by herself, causing Namicar get angry with her and Namicar along with Captain Wooder decide to find her In Hong Kong, she finally meet face-to-face with Kamille Bidan.

Not knowing that Kamille was an enemy, she felt bonded to him, since he is the first person who ever regarded Four as a person in her own right, not as a girl without memories who is bound to become a living weapon. After Kamille tends to her when she has a seizure due to her enhancements, they spend the afternoon together and even share a kiss.

It is only after the truth regarding Kamille is revealed to Four that she chose to pilot the giant Psyco Gundam and attack both Kamille and the city; her desire of getting her memories back and become a full-fledged person are more important than anything. Kamille desperately tries to calm her down and make her join the AEUG, to no real avail; she does calm down when he speaks to her, but cannot bring herself to defect.

After the battle, Four helped Kamille and his Gundam Mk-II back out into space. During this events the Psyco Gundam is severely damaged and Four is presumable killed in an explosion.

However, it was later revealed that Four and the Psyco Gundam survived and were taken to the Titans' Kilimanjaro base in Africa. Once there, the Psyco Gundam was repaired and equipped with an experimental new "psyco-control chair", further enhancing Four's abilities to control the Psyco Gundam. Furthermore, the unfortunate Four was forced once again to undergo medical experiments in order to increase her powers, almost losing her memories of Kamille.

At the beginning of November, U.C. 0087, the AEUG and Karaba launched an attack on the Titans base at Mount Kilimanjaro in Africa. Led by Amuro Ray, they were also supported by Kamille Bidan and Quattro Bajeena. It was then that Kamille discovers that Four was still alive. Four finally remembers Kamille when, after catching a glimpse of her, he infiltrates the Titans base to try saving her again, despite the warnings of Amuro about how they would be forced to fight each other. Four was glad to see him, but the backlash coming from her treatment as well as her own mental instability were a huge hindrance; again she was under heavy headaches, and her brainwashing turned her against Kamille.

In the end, Four was forced once again to fight against Kamille in the Psyco Gundam. She eventually sacrificed herself to save Kamille from a surprise attack from Jerid Messa, dying in Kamille's arms of the injuries she sustained. In her last words, Four comforts the grieving Kamille via saying that she's finally free from her horrible life, asking him to not grieve for her and promising to watch over him.

During the final battle against the Titans, the spirits of Four, Emma, Rosamia, and Reccoa appear to help Kamille by giving him their power so he can defeat Scirocco.

Later on, she appears as one of the spirits protecting Judau Ashta from Haman Karn in Gundam ZZ. 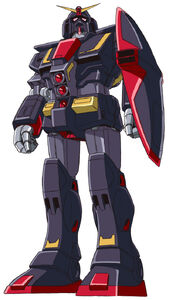 MRX-009 Psyco Gundam
Add a photo to this gallery

Retrieved from "https://villains.fandom.com/wiki/Four_Murasame?oldid=4018934"
Community content is available under CC-BY-SA unless otherwise noted.