Control and influence over large portions of the Moscow Metro

Many soldiers and armies
Tanks and heavy weapons

Take over and conquer the Metro and defeat the Red Line.

Nazi Fascists
The Fourth Reich, also known as The Reich, Reich, or just Nazis for short, is one of the primary antagonist factions in the Metro series. The Fourth Reich is a fascist neo-Nazi faction based in the ruins of the Moscow Metro and fights to cleanse of the Metro of all ethnic non-Russians and non-humans to "purify" the metro and lead the remaining Russian survivors. The Fourth Reich is currently in a state of war with the Red Line as the two factions fight over control of the metro and ideological differences.

The Reich is a National Socialist/neo-Nazi faction that is stationed in three main stations; Tverskaya, Chekhovskaya, and Pushkinskaya and have united all three stations under the banner of their newly declared Reich. They maintain outposts and military bases in several outlying stations and in an attempt to expand their militaristic faction and take control over the Metro. They only listen to the Fuhrer who is the de facto leader of the newly declared nation. They are at war with both the Red Line and anyone who is a threat to "genetic perfection" such as people with genetics from surface animals.

The Reich itself is completely modeled after Nazi Germany and the Third Reich and incorporates the Nazi ideology to govern society. Unlike its predecessor, the Reich itself are made up of Russian Nationalists that want "Russian Purity" effectively glorifying the Russian/Slavic race unlike original Nazism which promoted German supremacy. The Reich is also focused on Genetic Purity and treats all citizens with the slightest of impurities as second-class citizens and is considered a lower race. These lower races include Asians, blacks, Arabs and other races. Many refugees have since then fled from Nazi rule since the death penalty is high in the Reich as anyone with missing limbs or even a second toe of finger is killed on sight to prevent the spread of "inferior" genes.

The Reich is a totalitarian dictatorship based off of real life Nazi Germany and is similar to the Red Line. It is under the autocratic rule of the Fuhrer and any order he gives out is mandatory and is meant to be followed without question. The Reich has imposed strict anti-mutation laws and has created concentration camps to keep all dissidents out of sight. The goal is to help create a more "pure" human society and anyone without the physical standards is declared a mutant and is executed on the spot. The Fuhrer has modeled his rule after the Third Reich and seems to keep it that way.

The actual origins and beginnings of the Fourth Reich are never fully known and remain mysterious. In Metro the 2033 novel, the leader of the Caravan Artyom and Zhenya initially signed up on mentions that the Reich's origins trace back to the pre-war Russian National Unity Party which held neo-Nazi political ideologies. He also mentioned that they had disappeared for a while, but they later regrouped at Pushkinskaya shouting slogans such as "The Metro is for the Russians" and "Do a good deed - clean up the Metro!". After the expulsion of all ethnic non-Russians from Pushkinskaya, they then pushed towards the Chekhovskaya and Tverskaya stations doing the same thing as before. This lead to the annexation of all three stations and the establishment of the modern Reich.

After taking the three metro stations, the Fourth Reich was quick to make enemies as almost no other station was willing to share their beliefs of genetic purity and power along with the genocide of anyone who was deemed inferior by the Nazi government. They soon made enemies with the Red Line, a communist faction in the Metro, and the two ended up engaging each other in various wars and conflicts over the next twenty years after World War III. During that time, the Reich had annexed various bases, outposts and facilities, but have been unable to fully annex new stations or civilian populations.

In Metro 2035, the Fourth Reich attempts to annex Theatre Station, but are stopped by a group of Red Line soldiers who launch a counter-attack. This forces the Reich troops to retreat and head back to Schiller (Pushkinskaya) from the Lubyanka station where the Reds planned to attack it. To prevent the communist assault, the Reich detonated various explosives in the tunnel between the two stations which ended up being a bad idea as the tunnel's collapse resulted in mass flooding. The flooding ended up engulfing all three Nazi stations and the inhabitants were forced to flee the surrounding stations. The overall status of the Reich or Fuhrer is unknown, but with all three stations having been abandoned, it's most likely that the Reich is finished.

Nazis are basically civilians who have been brainwashed by the Reich government and believe their lies. They follow the Fuhrer's policies on genetic purity and the perfectionist standards but their are those who resist the radical policies put into place but most likely keep quiet or get sent to a concentration camp or executed immediately and others are just blind to the falsehoods and lies they are fed constantly. Citizens fall into two categories; soldiers and civilians.

Nazis who are in the military are fierce powerful warriors on the battlefield. They are loyal to the Reich and often shout out propaganda mottoes and terms to their enemies when in combat, Despite the soldiers' fierce brutality on the battlefield, maybe of them are actually herd missing their wives and children and even critisize the Nazi ideology but those who hate it defect to Hansa and don't hold extreme mindset unlike civilians.

Citizens of the Reich are ordinary people who live within Nazi territories and act as regular people. They are not exposed to the atrocities carried out by Nazi soldiers and believe that their cause actually benefits them. Civilians living in the Reich appear to live very comfortable since there are strict laws imposed on all the stations such as purity laws and all who are caught with inferior genes are killed on the spot even against high ranking officials.

Although the Reich is few in numbers (due to low population) different from the Communists, the Nazis have a strong more superior army since the average soldier is better trained and well equipped. The Reich has a stronger more stable command structure than other factions and better grasp on Pre-War military tactics possibly due to the militaristic nature of the Nazi ideology. Due to the Nazis' xenophobic beliefs, they have a "shoot first-ask questions later" type of policy and are hostile to all non-Nazis outside their territory but due to their fanatical military policies, recruits are low in Reich controlled stations and makes it impossible for outsiders to join the Nazi cause.

The Nazi Army uses their weapons and tactics to win battles against their opponents and are bent on taking over D6 Station since it has enough resources to supply the Reich for decades. Just like in real life, their soldiers are few in numbers but are well trained and more professional in combat and face lesser trained but large, oversized armies of Communist Troops like in World War ll, specifically, the Eastern Front.

The Fourth Reich has control over three main stations, Tverskaya, Chekhovskaya and Pushkinskaya all in a trinity formation. Various other military outposts, checkpoints, camps, and other holdings also exist, but they lack civilian populations and at most, the Fourth Reich has at least one known station outside of their main stations under their control. The small territorial holdings are most likely a consequence of the overall ideology and militaristic nature of the Fourth Reich which makes it unappealing to many outsiders.

In the novels, the Reich are made up of hardline militant Neo-Nazis and are much younger than in the game. In the Metro novels they are recently formed and Artyom is surprised to even know the mere existence of the organization. The Reich is despised and hated by outsiders but is not as  war hungry as they are in the games. In the books, their population is small because of more men than women and need to expand in order to survive.

In the games, the Reich is first seen in the level Frontline where they are seen fighting against the Red Army for control over the Depots and the Black Station levels. The Reich is under the rule of the unnamed Fuhrer and believe that the Russian/Slavic race is superior to all others and that all minorities should be killed.

They control the tunnels leading in and out of the stations under their control and are founded earlier than in the novel since it would take years to build their machine gun cars and Panzer trains. The Nazis also have Stalags, which are concentration camps where prisoners are worked until they die or used for live target practice by Nazi soldiers. In Last Light all the rumors are confirmed to be true. 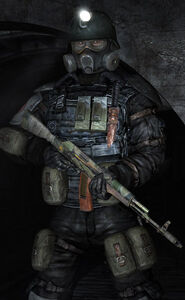 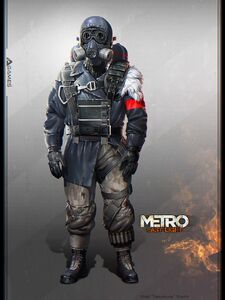 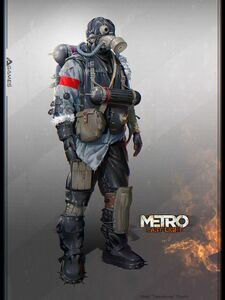 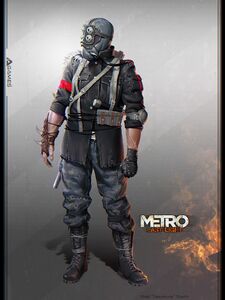 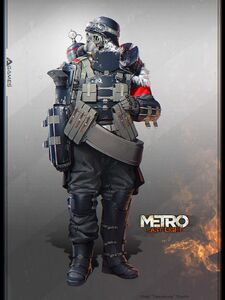 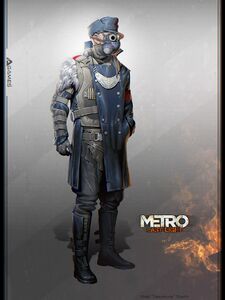 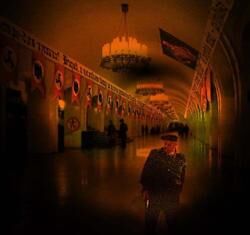 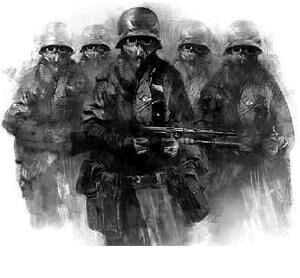