Reveling in life of excitement
Scheming

Sabotage her father to secure Cyberbiotics herself.
Upgrade The Pack members to see if they can best Gargoyles (all failed).
Protect her family from Oberon. (succeeded)

Fox Xanatos is one of the supporting villains of Disney's Gargoyles. She is the wife and assistant of David Xanatos.

She is voiced by Laura San Giacomo.

Born as Janine Renard (though she later had her name legally changed), Fox is the daughter of businessman Halcyon Renard, and his wife, Anastasia. Where her father valued personal integrity and honor above all else, Janine preferred "thrills" and fell in love with David Xanatos. Fox's birth surname, "Renard", is actually the French word for "fox".

Fox led the Pack up until its breakout from prison, when she chose to quit the team and remain behind bars while tricking her teamates into thinking she reformed. Gaining early parole for saving a guard, she and Xanatos became engaged, and married in the episode "Vow". However, she nearly died before their wedding in "Eye of the Beholder" when the necklace Xanatos gave her as an engagement gift was revealed to have latent magic powers and transformed her into a giant fox-like monster, the strain of the transformation and maintaining it nearly destroyed her body from within, but thanks to the reluctant assistance of Goliath and Elisa Maza, the necklace was removed and she survived.

In the episode "Outfoxed", she attempts a hostile takeover of Cyberbiotics, her father's company. The attempt fails, but her father takes no satisfaction in her defeat, lamenting that his only child has never shared his values. However, it is then that Fox shocks him with the news that might have better luck with "the next generation" of Renards, as she is pregnant with her first child (and thus, his first grandchild).

In "The Gathering", she gives birth to her son, Alexander Fox Xanatos. Her mother, Anastasia, is revealed to actually be Titania, Queen of the Children of Oberon, in disguise. Because of this, both Fox and her son have latent magical powers.

With the reinstatement of the Manhattan Clan to the castle, Fox made a point of reconciling with Lexington over their past conflict. For his part, Lexington agreed to the truce for the sake of her son while making it clear that he won't fully trust her after everything she's done. 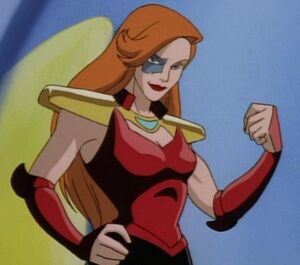 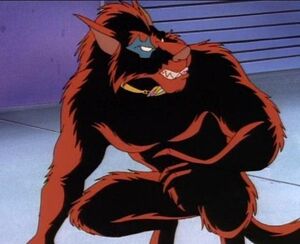 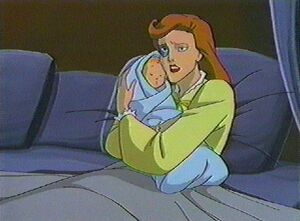 Fox with her son Alexander 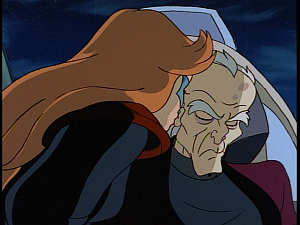 Fox with her father. 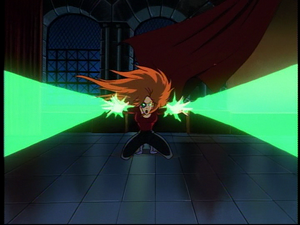 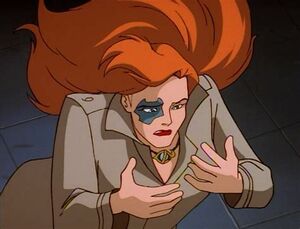 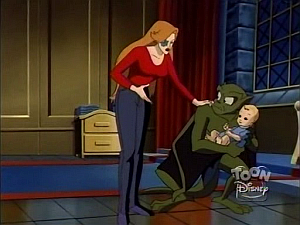