He is a mysterious entity that briefly tormented Bruce Banner while in a desert of New Mexico.

Fragment, from the second he was warned and challenged by Bruce Banner, showcased a cocky and overconfident personality, laughing at the fact that such a cowardly man, even with the power of the Hulk, was warning him.

He was also very nonchalant about his murderous nature, calmly saying he would murder the old man who had summoned him and would now kill him too for butting in, jokingly giving him a chance to redeem himself by taking him instead of the old man.

Threats aside, Fragment didn't end Bruce's life there. Instead, Fragment showed off his evil nature, as he decided to calm down the nervous scientist by showing him the past, of when he first transformed into the Hulk, tormenting Bruce with images while telling him he wasn't innocent nor a peace-lover, having used a bomb and whatnot.

When Bruce turned into the Hulk, Fragment was glad to have someone who could put up a decent fight. He continued to mock Bruce and Hulk as he fought them.

Fragment's true objectives remain unknown, but it seems as though he was merely looking for some fun and the chance to torment somebody.

Fragment was a dark blue humanoid with puzzle-like patterns all over his body, including his large, white eyes. He lacked ears and had an athletic build, which he later bulked up to match the Hulk.

His body was originally thought to be a suit by Bruce, but that was later proven to not be the case, as it was destroyed into many pieces, only his head remaining and later, only his eyes.

In the issue's cover, he looked slightly different, lacking a mouth or a nose and with pattern-less eyes, now colored yellow. He was also much larger, looming over the main characters, though this was likely just illustrated this way to show the threat and power he presented.

While driving down the desert, Bruce Banner is forced to swerve out of the road and crash due to an elderly man sitting in the middle of the road. The old man tells Bruce that he has a terminal disease that cannot be cured and as such he believes he should have the right to decide to die on his own terms, and that he has hired an assassin to kill him.

The assassin is Fragment, who suddenly appears in an explosion between them. He places the old man inside an energy construct in the shape of a cage, and Bruce warns him, to which Fragment can't help but laugh. Bruce is too scared to face him, and Fragment decides to make things worse by having Bruce remember how he became the Hulk. Bruce tries to resist, but Fragment is unimpressed and opens the ground underneath Bruce, swallowing him.

Bruce finds himself in a dark void, surrounded by his friend Rick Jones and his beloved Betty Ross, suffering and making Bruce feel as though there's only misery and death for Bruce, as intended by Fragment who reminds him from above that he'll always get what he'll deserve because he's the Hulk, and will never bring anything but unhappiness to all he loves.

Suddenly, Bruce, now turned into the Hulk (the grey incarnation), smashes out of the ground to face Fragment, who welcomes the challenge. The two slug it out as Fragment continues to taunt him, calling him Bruce which greatly angers Hulk to the point where the gamma being grabs two massive boulders and smashes them down on Fragment, burying him under hundreds of tons of rock.

The Hulk returns to the jeep, flipping it back into place, but an explosion happens in front of Hulk and Fragment reappears, continuing to taunt and mock Hulk, getting the giant angry enough that he punches Fragment to pieces, but this does not kill him. Fragment's head remains, laughing at Hulk to the monster's confusion. Hulk thinks this is a bad dream orchestrated by Nightmare, or that the Leader is behind this. Both times, Fragment laughs it off, denying it and disappearing in a flash of light, with only his eyes remaining as they tumble down into the earth like coins.

Turning to the old man, no longer encased in that energy construct, the Hulk asks what's going on, to which the old man replies that Fragment was just a creation of his mind. Hulk asks how he could know, grabbing him by the beard hard enough that he tears it off, discovering it to be fake. The old man removes his white hair, which was also fake, revealing himself as another creation of Bruce's mind as well in the form of a young Bruce Banner.

Telling Hulk, now turning into Banner, that they've experienced everything but acceptance, and that he must accept that now and forever they will be the Hulk. Either that, or he can kill himself. The illusion hands the real Bruce a gun, but Bruce won't give up his life or existence, as painful as it is to deny the transformation. A harsh storm passes as Bruce and Hulk have a mental battle, which Bruce wins, unabling Hulk the chance to transform.

Bruce heads back to the jeep, wondering if this was real or not as he sees the other Bruce is gone but that the Hulk's handprints on the car are there from when he grabbed it. He ignores this and drives off to gamma base, declaring that no matter how bleak the situation may be, suicide will never be an option, since for as long as there's life, there's hope.

From a hole in the ground, Fragment's eyes can be seen, and the entity laughs after hearing Bruce say this, sinking back into the hole never to be seen again, the ending narration balloon making things uncertain with "The End?".

Real or imaginary, Fragment showcased a vast array of abilities, all seemingly stemming from his power to warp reality, and he most likely didn't get to display them all.

Teleportation: His teleportation caused an explosion and a small pillar of smoke whenever he appeared.

Energy Manipulation: Bruce noted that Fragment generated some sort of plasma force-like solid energy from his body. He could use this to create energy constructs or shoot energy blasts from his fingertips.

Mental Manipulation: Fragment projected Bruce's own memories via his eyes into Bruce's mind, reminding him of past events.

Earth Manipulation: Fragment made the earth swallow Bruce, opening up a hole and then burying him underneath tons of rubble.

Void Creation: After burying Bruce, he cast him into a dark void filled with memories making him suffer.

Mass Manipulation: Before his fight with Hulk, Fragment chose to make it more fair and fun by doubling his own mass.

Supernatural Strength: Fragment was able to briefly match the physical power of the grey Hulk.

Illusion Manipulation: Much of what Bruce and Hulk saw in the desert were likely illusions.

Weather Manipulation: The harsh storm at the end of the issue was likely caused by him, as it came and went in a matter of minutes. 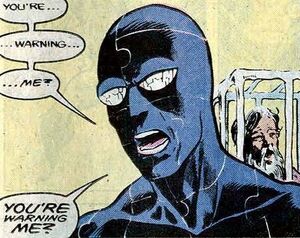 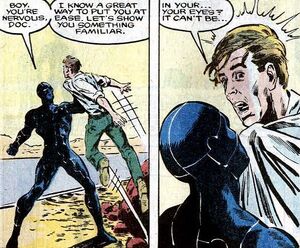 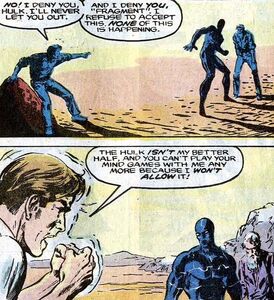 Bruce stands up to Fragment 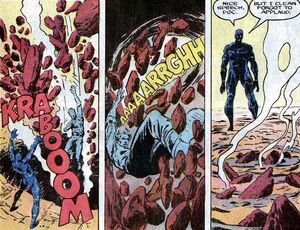 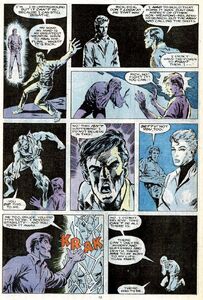 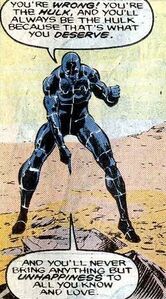 Fragment torments Bruce while within the void he created 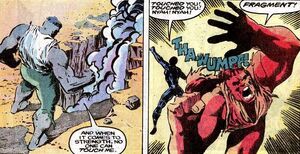 Fragment is buried by Hulk 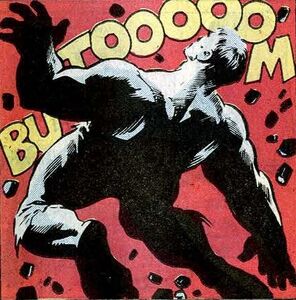 Fragment teleports in front of Hulk 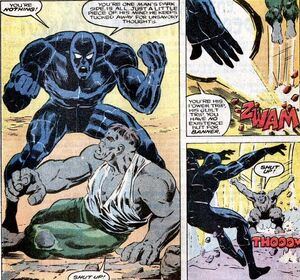 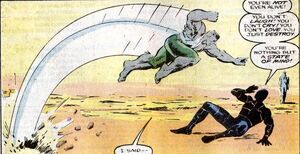 Fragment about to be fragmented to pieces

Fragment reduced to just a head 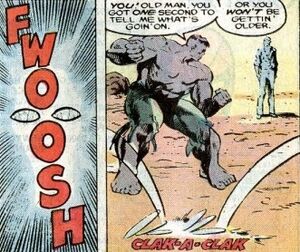 Fragment destroys himself, except for his eyes