Sage
Grand Master of the Parisian Rite of the Templar Order

Orchestrating the French Revolution from behind the scenes.

Kill his opponents to rise through the ranks of the Templar Order.

Have King Louis XVI of France executed and start the French Revolution (both succeeded).

François-Thomas Germain was a Sage, the Grand Master of the Parisian Rite of the Templar Order and is the main antagonist and the final boss of the 2014 Ubisoft videogame Assassin's Creed: Unity, set in the French Revolution.

He was responsible for the assassination of his predecessor in the Templar's Grand Master ranks, Francois de la Serre, which led to his promotion to Grand Master and, unintentionally, caused the protagonist Arno Dorian to join the Assassins and led to de la Serre's daughter, Elise de la Serre, to get revenge on the Sage.

His plan is to recreate the Templar Order in his own way, so that they can become the secret masters they were destined to be. Motivated to do this by Templar Sage Jacques de Molay and his legacy, Germain had managed to execute King Louis XVI of France and start the French Revolution. He was killed by Arno Dorian while battling him and Elise with his weapon, the Sword of Eden.

He was voiced by Julian Casey, who also voiced Buck Hughes in Far Cry 3.

Born with the memory of the First Civilization in his mind, Germain determined to shape the destiny of thehuman race in his own way. But due to conflicting ideals, he was cast out of the Templar Order by its Grand Master, François de la Serre. Germain deemed the Order corrupt and having forgotten its original purpose, and schemed with other Templars who formed a splinter group with him.

Though further involvement of Germain is unknown, he was the mastermind behind the murder of de la Serre, as well as the maker of the weapon used for the murder.

After Arno dealt with de la Serre's direct killers, Charles Gabriel Sivert and Le Roi des Thunes, he was led by the blade used to kill de la Serre to its maker, François-Thomas Germain. Upon Germain's first encounter with Arno, he craftly downplayed the fact that he once was a Templar himself, and pretended to be a simple silversmith who unintentionally discovered Chrétien Lafrenière's terrible secrets while working for him. Germain catered to Arno's desperate desire for revenge, and falsely accused Lafrenière of having him make the poisoned pin blade, as well as plotting something ominous in Halles.

Arno infiltrated Lafrenière's meeting with his followers in a graveyard in Halles, just in time to witness his zealous lecture against the Jacobin Club and the Assassins. Blinded by his rage and misled by Germain's false information, Arno decided against reporting what he had learned to the Assassins' Concil, and chose to take action immediately instead. But after assassinating Lafrenière, Arno found that despite the Templar's disagreements with de la Serre on the truce with Mirabeau, Lafrenière was the man who sent the letter warning de la Serre about the traitor within the ranks of the Templars.

Since Lafrenière was loyal to de la Serre, which was further hinted by Mirabeau's statement, he might not have been the man behind the murder. The attack planned by Lafrenière on a certain location, which was not among the Assassin safehouses, became the new lead of Arno's investigation.

By the time Arno had discovered Germain's deception from Élise de la Serre, Germain had already abandoned his residence, knowing that his bluff would not hold for long.

Execution of the King

In 21 January 1793, Germain was present at the Place de la Concorde, where the former King of France, Louis XVI was about to be executed. The Templar Grand Master then confronted Arno once again, proclaiming the rebirth of the Templar Order. Germain claimed to Arno that the reason for de la Serre's murder was to rid the Templar Order of corruption and bigotry. Germain also stated that de la Serre's murder was only the first phase of the Order's 'rebirth', and that the Order is truly reborn with the death of the former King Louis XVI.

Germain revealed his plans as Louis XVI was placed at the guillotine. By ridding France's upper class and aristocracy of power, it would be much easier for the Templars to gain control over France, by granting the power to the people instead. Once the former King was beheaded, Germain then made his escape, leaving Arno to deal with his subordinates.

After the downfall of Maximilien de Robespierre, knowledge of Germain's garrison, the Temple, was exposed to Arno and Élise de la Serre, who both infiltrated the Temple on their own and attempted to assassinate Germain. It was during this endeavor that Germain was tracked by Arno to the Temple's rooftop. As the Assassin attempted to kill Germain, he soon discovered that the Templar wielded an ancient and advanced weapon, a Sword of Eden, making him a very difficult opponent.

Upon their final confrontation, Arno requested that Élise distract Germain, which she successfully did, allowing him to land three strikes. Prompted to use the Sword's power, Germain blasted Arno away with the artifact's power, pinning the Assassin under a large chunk of debris.

Faced with the choice of helping Arno free himself or preventing Germain's escape, Élise initially went to aid Arno, but soon changed her mind, engaging in a duel with the Templar Grand Master. In the exchange of blows, Élise managed to damage the Sword of Eden enough for it to backfire, with the resulting explosion injuring Germain and killing Élise. Just prior to the blast, Arno succeeding in breaking free, but arrived too late to stop the event from happening.

Mournfully, Arno looked over to the body of his dead love, before turning to assassinate Germain with his Hidden Blade. Arno witnessed Germain speaking directly into his mind, elaborating on the memory of the First Civilization, and explaining its driving factor in his motivation to purge the Templar Order.

Years after the confrontation, Arno entered the temple once more, accompanied by Napoleon Bonaparte. There, they discovered Germain's corpse which had long since decayed. They then buried his skeletal corpse in the Parisian catacombs.

As a reincarnation of Aita, a member of the First Civilization, Germain displayed contempt towards humanity, believing that it should revert back to being the subjugated race they had been millennia before. His beliefs were also influenced by the ideologies of Jacques de Molay, who was also a Sage.

Germain was extremely ruthless, willing to go to great lengths to see his ambitions fulfilled, and humanity returned to the role of slaves. This was seen through the turmoil of the French Revolution, where his machinations caused millions of civilians across France to starve, and thousands more to die under the Reign of Terror. He also expressed little remorse for the deaths of his Templar followers, even forsaking them if they were ever to outlive their usefulness, as seen with Robespierre. Germain believed these sacrifices to be for the greater good.

He cared little for his own well-being, calmly embracing death in his conversation with Arno. This was due to his confidence that someone else would carry on his ideals in the future, and the knowledge that as a Sage, he would be reborn again. 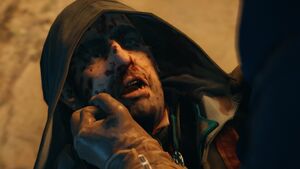