Bring Eddie back to life.

Minion
Frances Booth is the secondary antagonist of the first season of the horror anthology series Channel Zero.

According to Booth, Frances had a meaningless life before becoming Eddie's right-hand woman, but afterward, she became fully devoted to him, not necessarily because she loved him, but it is because her life had meaning now.

Frances was a seemingly kind elementary school teacher who lost her son in the Iron Hill Murders. In reality, Eddie was behind the murders; after being tormented by bullies several times, Eddie developed psychic powers and he used them to murder his enemies. Prior to meeting Eddie, Frances suffered from chronic seizures, which he healed her of. Becoming fanatically devoted to Painter, Eddie shows her a glimpse of the real Candle Cove, and she begs him to let her experience it again. When Eddie explained that his psychic powers were fueled by the blood of children, Frances remorselessly sacrifices her own son to Eddie. Since then, she lures children into her basement to watch Candle Cove, brainwashing them into becoming sacrifices for her "god."

Sometime prior to these events, Eddie had gotten into a quarrel with his twin brother, Mike, which results in him accidentally killing him. Frances apparently was still able to communicate with Eddie's spirit, and she constructs a vessel for him made out of human teeth. Eddie manifests in the real world as the Tooth Child, a nightmarish entity that feeds on human teeth.  How Booth exactly acquires the teeth is unknown, but it is highly implied that they were harvested from the bodies of the slaughtered children. Eddie was planning on reentering into the world by taking possession of his twin brother's body.

Twenty-eight years later, Mike - who was now a child psychologist - returns to Iron Hill, presumably due to his deceased brother's influence. As soon as he returned, he realized that Candle Cove was airing again. Booth had been secretly brainwashing her students, as well as teaching them to kill. When Mike admits that he had murdered his brother, Tim (who had a brother who was one of the victims of the Iron Hill Murders) attempts to kill him but fails. Mrs. Booth then sends the children to dispose of him. When Daphne comes to her seeking for help, she slits her throat with a pirate hook as punishment for her husband's behavior. Afterwards, she sends the brainwashed children to stab Jessica to death as she watched on in cold satisfaction. Eddie brainwashes more children through the puppet show as well as Jessica's children. She calls Mike, requesting that he meet her in a strip mall, but unbeknownst to her, a cop was tracing her call. She murders the cop, and she then breaks into Marla's house at gunpoint.

In the finale, Booth sends the children after Sheriff Amy and Gary (Jessica's husband) when they were onto her trail. She boasts to Marla that she had taken care of Eddie for years, stating that she is a better mother than she is. However, Marla points out that she murdered her own son, meaning that she was no one's mother. Frances stabs Marla multiple times, only to get shot by Sheriff Amy. Marla finishes her off by piercing Booth's head with her own pirate hook. 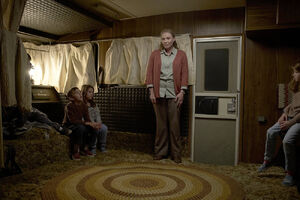