Create a DNA-specific virus and get promoted (failed).

Dr. Francesca De Santis is the secondary antagonist of "World of Tomorrow" episode of Hitman. She is a well-known Italian bio-engineer, a leading researcher at the Ether Corporation, and member of Providence. She was assigned to make sure that Silvio Caruso finished working on the biological weapon, and was later assassinated by Agent 47.

She was voiced by Salli Saffioti, who also voiced Cleo de Nile in Monster High, Mistral in Metal Gear Solid: Revengenace and Eramis, Kell of Darkness in Destiny 2: Beyond Light.

De Santis grew up in suburban Florence as the daughter of a neo-classical composer and a stage designer. She pursued a scientific career and quickly gained reputation for her thoroughness and single-minded perseverance.

De Santis agreed to go undercover at Silvio Caruso's field lab to spy on him. She did this in order to reach the coveted position as regional head of R&D at one of the world's largest pharmaceutical companies, the Ether Corporation. She was instructed to have Caruso eliminated and carry on the work in his place, if Caruso should become a threat to the project or to the company.

De Santis wears a lab coat over a dark dress. She wears a pendant. 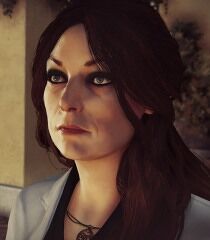 Retrieved from "https://villains.fandom.com/wiki/Francesca_De_Santis?oldid=4345483"
Community content is available under CC-BY-SA unless otherwise noted.