Francis is a antagonist appearing in the TV series Heroes Reborn. He is played by Peter Mooney.

Francis is EVO (advanced human) with the ability of telekinesis. He's a agent of tech conglomerate Renautas and the boyfriend of Renautus CEO Erica Kravid's daughter Taylor Kravid.

In "Odessa" he is in a casino waiting for Molly Walker to show up. He is on a winning streak at one of the casino tables but this is only because of his Telekinesis. Molly approaches him and they start talking. Francis invites her to his hotel and she agrees to go. While it the hotel room, she tells him that she knows that he's an EVO and that he cheated at the casino table using his abilities.

She tells Francis to give her all the money he won and no one will know but Francis chooses not to and he locks the hotel room door. Molly sprays something in his face which causes a flame from the cigar he was smoking thus burning him. This angers him and he pins her against the wall almost crushing her but is then knocked out by a civilian. Later, he is back in the hotel room with Taylor and Molly, who has been caught by the two..

In "Under the Mask" he is at the airport with Taylor and Molly. Francis is told that he isn't allowed on the plane and that he has to stay behind while Taylor and Molly go. Later Taylor calls his phone but he doesn't pick up. 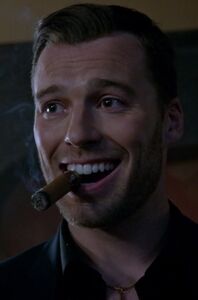 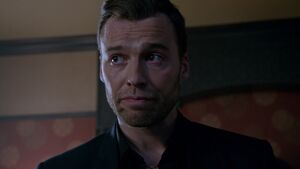 Add a photo to this gallery
Retrieved from "https://villains.fandom.com/wiki/Francis_(Heroes_Reborn)?oldid=2549755"
Community content is available under CC-BY-SA unless otherwise noted.