Collecting all sorts of technology.

Keep Tippi all to himself by any means necessary (failed)

Francis is a chameleon, strongly personified as a highly stereotypical nerd, who kidnaps Tippi after declaring her a rare collectible. He then vows to take pictures of her and place them on the website, Digibutter.ner, a forum filled with geeks and nerds of all sorts. He names Tippi 'Francine' and calls her that throughout the game. However, by the time Tippi and Count Bleck left, Francis calls her Tippi. Amongst his many obsessions, Francis enjoys watching anime, collecting and/or playing video games, cats, and "hot babes". He lives in his own domicile, Fort Francis, where he has a large number of MeowMaids that are responsible for guarding the fortress as well as tidying his anime collections or recording his favorite television shows. Francis also has the habit of saying "hi-technicaaaaal!" if he believes something is cool, awesome, or "schweet."

Francis's lack of social skills disables him from being able to communicate with others face-to-face, and as a result, has no offline friends. When he is confronted by Princess Peach he is unable to talk directly to her, and instead plants the two into a dating sim entitled Swoon.exe, where he tries to initiate a discussion where he tries to make small talk and woo her over. However, regardless of how the player answers his question, Peach eventually demands for him to return Tippi and uses Boomer to destroy the dating sim, which kicks off the battle since Francis is desperate to keep her due to being her only offline friend, by his own admission.

Upon defeat, he runs away yelling "Mercy!" as he leaves the room. After this, Tippi is released. After Francis' first defeat, Francis cannot be found in Fort Francis. One of the MeowMaids says it is because Francis is in the hospital after he hurt himself playing one of his video games.

Francis can optionally be fought once more later on in Castle Bleck after Mimi transports him to the castle to finish off the player. More specifically, the three remaining heroes (as Bowser was lost arguing with O'Chunks) could choose to fight him again after Mimi, disguised as the friendly Merlee, asked Mario which things he found most challenging, which always included an easy enemy, a hard enemy, or a helpful item. The hard enemy for Mimi's third and last question was Francis, and, if Francis was chosen for that question, Mimi (having Mario's input on what obstacles challenged him most) managed to place him in a room in Castle Bleck.

Francis had apparently been watching one of his favorite television programs before being warped into the castle, and, despite his confusion, he yearned to have Tippi back so much that he talked himself into thinking that his Reclinatron 4500 chair had, manipulating his very dreams, warped him to Tippi. He then engaged in battle once more with Mario and the rest of the party, and, despite how later he was fought in the game, he had no different statistics or attacking methods, and therefore even the same amount of HP. He was, of course, defeated, and after his defeat he ultimately warped away, stating that he was going to simulate the battle on his computer to see what had kept him from winning.

If the player returns to Fort Francis after beating the game, they can purchase Tiptron from Francis for 999 coins. After the player buys Tiptron, he reveals plans to build Tiptron Mk. II, an improved version of Tiptron. Francis then orders a MeowMaid to get him some Nibble-ums to fulfill his hunger before he begins his work. Francis is never shown to have finished Tiptron Mk. II, but it is implied that he did eventually. It is notable that Francis calls her Tippi instead of Francine as the player is given the offer of buying Tiptron.

Francis has an array of attacks against the player: his ability to blend in with his surroundings allows him to become invisible and avoid attacks. This ability leaves the player with little time to attack him; that is, unless Mario flips into 3-D, where he can see Francis's moving shadow. His most devastating weapon is his tongue. Francis can swallow Mario and his friends whole and slowly damage them while inside him, or can use his laptop to call upon an army of Meowbombs. He also has a camera, which he uses to temporarily blind Mario and his friends.

Francis is known to have a mother, who is unseen and unnamed. Francis will mention his mom in an optional event found towards the end of Fort Francis. After starting up his Swoon.exe program, the first question Francis asks to its subject of Princess Peach (after he explains the dating simulator) is "What is your name?". Peach can then choose from three answers, the second (and most passive) of which is "Tell me your name first!". Francis will then obey her order, noting to himself that Peach is "a stickler for etiquette" and recalling his similar mother. Remembering his mom also makes Francis level up in passion for unknown reasons. 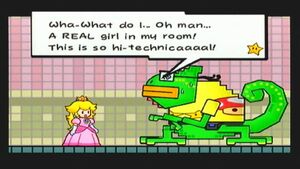