Steal Pee-Wee's bike (succeeded for a while)

Francis Buxton is the main antagonist of Pee-wee's Big Adventure.

He was portrayed by Mark Holton, who also played the title character John Wayne Gacy in the biography movie, Gacy.

He is very spoiled and selfish. He would always get what he wants regardless, especially when he tried to buy off Pee-wee's very own prized bicycle on his birthday but Pee-wee refused and Francis vowed to make his rival pay for his insolence. Francis ranked #97 greatest villain of all time on Wizard Magazine's Top 100 greatest villains ever list.

Francis walked by Pee-wee's house and offers to buy Pee-wee's bike for his birthday, but Pee-wee simply refuses. Pee-Wee, who chained his bike in a shopping center, finds the chains cut and his bike stolen.

When Pee-wee reported the police about his missing bike, they said it hard to recover stolen bicycles, but try to think of anyone who wanted the bike as a possible suspect. This causes Pee-Wee to remember Francis and proceed to the Buxton mansion. Pee-Wee began attacking Francis while taking his bath and the fight was broken up by Francis' father and butler. However, Pee-Wee lacked proof, and Francis had an airtight alibi (He and his father spent all that day assembling the train set he got for his birthday). Francis, who did indeed secretly hire a street thief to steal the bike, got worried by Pee-Wee's relentlessness when he heard Pee-Wee tell a radio DJ about a large reward for recovering the bike. Francis then paid the thief more money to be rid of the bike. At some point the bicycle was bought by Warner Brothers to be used as a movie prop.

After his adventures finally ended in his daring rescue of all of the animals from the burning pet shop, Pee-wee is brought before a Warner Bros. studio executive who offers to buy the rights to Pee-wee's story in exchange for dropping all charges. Dottie is summoned into the office, bringing along Pee-Wee's beloved bicycle. He attends the premiere at his local drive-in theater, and it turns out to be a James Bond-style action film involving James Brolin and Morgan Fairchild fighting ninjas. Pee-wee has a cameo appearance as a bellhop, with his voice dubbed over. Then Francis appeared with a TV news crew to Pee-wee and Dottie, giving an interview with them in which he claims that he was the one who first helped Pee- Wee learn to ride his bike. Francis approached Pee-wee because he wanted to ride on his bike. Pee-wee allowed it, only to press a yellow button that is an ejection button and it threw Francis high up in the air. After watching for a few minutes, Pee-wee decides to leave, having already lived the real story. Reunited with his bike, he rides away with Dottie, happily ever after. 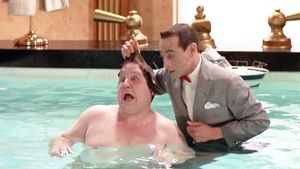 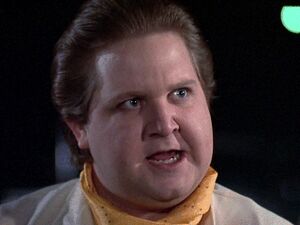