Murder as many families as possible

Francis Dolarhyde is the main antagonist of Thomas Harris' 1981 novel Red Dragon and its two film adaptations, 1986's Manhunter and 2002's Red Dragon, and a recurring antagonist in the third and final season of the TV series Hannibal.

Dolarhyde is a serial killer nicknamed "The Tooth-Fairy" due to his tendency to bite his victims' bodies, the uncommon size and sharpness of his teeth and other apparent oral fixations. He murders entire families on a lunar cycle at the behest of an alternate personality he calls "The Great Red Dragon", after ​William Blake​'s painting The Great Red Dragon and the Women Clothed with the Sun​.

He was portrayed by Tom Noonan - who also played The Ripper in Last Action Hero, Jake Berlin in Law & Order: Special Victims Unit, Stewmaker in The Blacklist, and Cain in RoboCop 2 - in Manhunter, by Ralph Fiennes - who also played Amon Goeth in Schindler's List, Rameses in The Prince of Egypt, Lord Victor Quartermaine in Wallace & Gromit: The Curse of the Were-Rabbit, Dennis "Spider" Cleg in Spider, Lord Voldemort in the Harry Potter film series, Hades in Clash of the Titans, Barry in Dolittle, Raiden the Moon King in Kubo and the Two Strings - in Red Dragon, and by Richard Armitage - who also played Heinz Kruger in Captain America: The First Avenger - in the TV series Hannibal.

Dolarhyde is tall, muscular, and very strong. His body is covered in tattoos, most noticeably a tattoo of William Blake's painting The Great Red Dragon and the Woman Clothed With the Sun on his back. He has a scar on his lip from having corrective surgery to fix the cleft palate he was born with, and speaks with a slight lisp when pronouncing sibilants.

Dolarhyde was born in Springfield, Missouri on June 14, 1938 with a cleft lip and palate. His mother, Marian Dolarhyde, had Francis with her ex-husband Michael Trevane, an alcoholic, Irish musician. Francis was abandoned by his mother and cared for in an orphanage until the age of five, until Michael learned about his existence and told Marian’s mother about it, shortly before Michael’s death in a car wreck.

Dolarhyde was then taken in by his maternal grandmother, living at the family’s mansion which also served as a nursing home for elderly people. She subjected him to severe emotional and physical abuse, often threatening to cut his penis off with a pair of scissors. He began torturing animals at a young age to vent his anger over the abuse. Meanwhile, Marian remarried to a successful lawyer, Howard Vogt, and had three stepchildren. After Dolarhyde’s grandmother became afflicted with dementia, the nursing home was shut down and Dolarhyde was turned over to the care of his estranged mother and her husband in St. Louis; he was further abused by this family, and was sent back to the orphanage after being caught hanging his stepsister's cat.

After being caught breaking into a house at aged 17, he enlisted in the United States Army. While on his tour in Japan and neighboring countries, he learned how to develop films and receives cosmetic surgery for his cleft palate. In 1961, Dolarhyde's grandmother was released from the mental hospital, and he received a hardship discharge so he could take care of her, which he did until her death in 1970. He then got a job with the Gateway Corp., eventually becoming the production manager in their home movies division.

Beginning of the Killings

Dolarhyde begins his killings by murdering two families within a month after discovering The Great Red Dragon and the Woman Clothed with the Sun, which gave voice to his alternate personality. He commits both crimes on or near a full moon; it is hinted in the novel that he killed before that, however. He chooses his victims through the home movies that he edits as a film processing technician. He believed that by killing people, or "transforming" them as he calls it, he can fully "become" the Dragon. On a trip to Hong Kong, he has a large dragon tattooed across his back and has two sets of false teeth made; one of them for his usual life, the other distorted and razor sharp for his killings, based on the mold of his grandmother's teeth.

Dolarhyde reads the tabloid The National Tattler, collecting clippings about his murders, his idol Hannibal Lecter’s arrest and trial, and FBI profiler Will Graham's investigation of the "Tooth Fairy" murders. He writes Lecter a “fan letter” and sends it to the mental institution where the doctor is imprisoned. Lecter writes him back, and includes a coded reference to Graham's home address.

In an attempt to provoke Dolarhyde out of hiding, Graham interviews Freddy Lounds of the Tattler, in which he refers to "The Tooth Fairy" as impotent, homosexual and possibly the product of incest, and says that Lecter is offended that such a "bottom-feeding lowlife" considers himself in the same league as him. The interview outrages Dolarhyde, who kidnaps Lounds, intimidates him into recanting his article on tape, and then bites his tongue out. Dolarhyde returns to Chicago and sets Lounds on fire, and rolls him down a incline into the Tattler's parking garage.

Falling in Love with Reba

Dolarhyde falls in love with a blind co-worker named Reba McClane. At first the relationship quells his murderous impulses, but eventually his alter ego orders him to kill her. He flies to New York and devours the Dragon painting, believing it would destroy the Dragon, but it only made his alternate personality angrier. When he returns to see Reba, he sees her and co-worker Ralph Mandy together. Believing (incorrectly) that Reba is cheating on him, Dolarhyde shoots Mandy in the head and knocks Reba out with chloroform. He brings her to his home and sets it on fire, intending to kill Reba and himself with a shotgun. He cannot bring himself to kill her, however, and apparently commits suicide by shooting himself in the head.

Final Showdown with Graham and Death

It turns out that he actually shot Mandy's to fake his death; Reba, being blind, was fooled. He follows Graham to his home in Marathon, Florida and holds Graham's son, Josh, hostage, preparing to "change" the boy in front of Graham. Noticing that Josh has wet himself, Graham uses the same verbal abuse that Dolarhyde's grandmother had inflicted on him. which makes Dolarhyde so angry that he stops paying attention to Josh, allowing the boy to escape. Dolarhyde stabs Graham in the face with a piece of glass, but Graham's wife Molly shoots him dead before he can kill Graham. 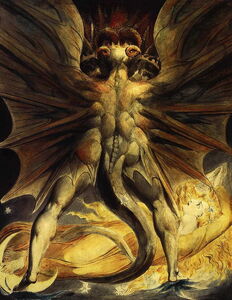 The Great Red Dragon and the Woman Clothed in Sun, the object of Dolarhyde's obsession. 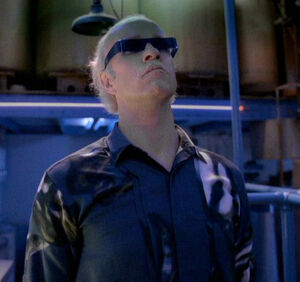 Tom Noonan as Dolarhyde in Manhunter. 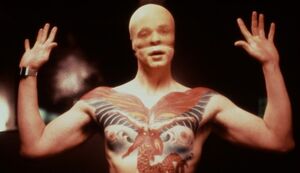 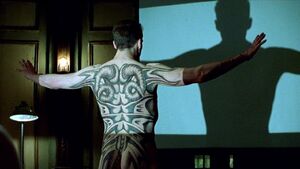 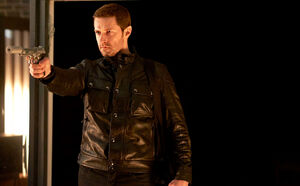 Richard Armitage as Dolarhyde in the Hannibal TV series. 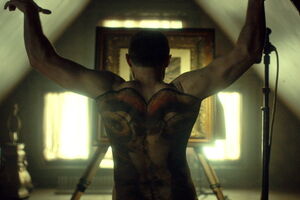 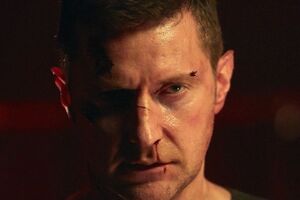