Francisca is a member of The Three Mage-Sisters of the Jambastion Cult who serve Lord Hyness and a major antagonist in Kirby Star Allies.

She is voiced by Reina Ueda.

Prior to the events of Star Allies, Francisca was a normal girl who found herself stranded in the middle of a snowstorm. Before she froze to death, Hyness appeared and granted her the power of ice. In gratitude for her rescue, she became one of Hyness' followers alongside Flamberge and Zan Partizanne.

After Kirby defeated a possessed Meta Knight, Francisca and her comrades land their Jambastion on Planet Popstar. Kirby goes to face the three mages and confronted Francisca first, where it is revealed that they're gathering dark hearts for some evil purpose. Later on in the game, Kirby encounters Francisca on an icy planet where, furious at herself for losing to him before, Francisca fights him again, but is once again defeated. Near the end of the game, Kirby approaches their master, Hyness, who is performing the reviving ceremony for their god, Void Termina.

During his fight with Kirby, Hyness hypnotizes Francisca and the other two Mages and uses them as living weapons to fight Kirby. After Kirby defeats Hyness, the Officiant of Doom uses himself and the mages as offerings to complete the ritual to summon Void Termina.

During the fight with Void Termina, Kirby and friend enter the deity's body to rip out the core. They find Francisca along with Hyness, Zan, and Flamberge, trapped inside and free them, causing all of them to be ejected out of Void Termina.

Afterwards, Francisca and the other Mage-Sisters found themselves in Another Dimension. After Kirby defeats the corrupt Hyness, the trio team up and battle Kirby, blaming him for bringing Hyness' corruption. After Kirby defeats them, if he collected a hundred or more friend hearts, he purifies the Mage-Sisters and Hyness of the corruption from the Jamba Heart. Following the events of "Heroes in Another Dimension", Francisca and the other Mage-Sisters redeemed themselves and became Kirby's allies.

Francisca becomes a resident of the Port Village after Team Kirby defeats Parallel Nightmare in the Empyrean. She can be seen sitting on a ledge to the right, having a discussion with Flamberge. She also appears as a sticker that can be bought from the Shoppe for thirty Gem Apples.

Francisca and the other Mage-Sisters appear as a hazard on the Jambastion Entrance stage, hovering in the background before one of them floats to the foreground to attack. If Francisca is chosen, she will attack by swinging her axe four times before finishing with a thrust, or by throwing her axe like a disk from one corner of the arena to the next.

Francisca and the other Mage-Sisters appear as a single advanced class support spirit in Super Smash Bros. Ultimate, with the Mage-Sisters represented as three female Robins whose special moves have enhanced power. 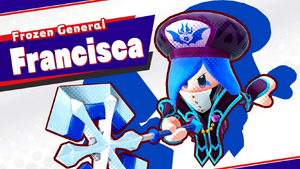 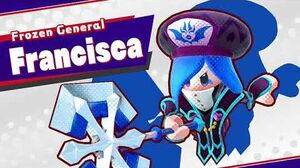 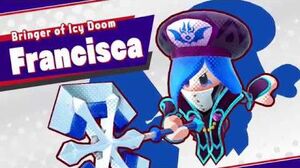