The Man with the Golden Gun

The Man with the Golden Gun

Acquire the Solex Agitator which is capable of producing solar power plants and sell it to the highest bidder (both failed).

Francisco Scaramanga is the titular main antagonist of the 1965 James Bond novel The Man with the Golden Gun, and its 1974 live action film adaptation of the same name. He is a powerful and ruthless freelance assassin equipped with a special gun made of pure gold.

In the movie, he was portrayed by the late Sir Christopher Lee, who also played Frankenstein's Monster in The Curse of Frankenstein, Count Dracula in Hammer Studios' Dracula films, Fu Manchu in Hammer's Fu Manchu series, Lord Summerisle in The Wicker Man, King Haggard in The Last Unicorn, Cushing Catheter in Gremlins 2: The New Batch, Saruman in Sir Peter Jackson's The Lord of the Rings and The Hobbit film trilogies, Count Dooku in the Star Wars prequel films, Dr. Victor Gannon in Return From Witch Mountain and The Jabberwock in Alice In Wonderland.

Francisco Scaramanga is a high-priced assassin, supposedly the best in the world, charging one million dollars per kill. He's best known for being "The man with the golden gun" because he only uses bullets made of gold in a fictitious, 4.2 mm cartridge. All of Scaramanga's dealings go through his henchman Nick Nack, which allows Scaramanga to be anonymous.

Francisco Scaramanga was a British national born in a traveling circus. His father was the ringmaster, a former Cuban national, and his mother was the snake charmer. By age ten, he was part of the circus as a trick-shot pistol marksman. At age fifteen, he became an international assassin-for-hire. He was recruited some years later by the KGB while living in Ipanema, in Rio de Janeiro, Brazil, and trained in Eastern Europe where for many years he was basically just another "overworked and underpaid assassin" for the KGB. He quit the KGB in the late 1950s, becoming an independent hitman-for hire. No photographs of him exist, but he has unusual anatomy: a third nipple. This information later comes in handy to Bond, who uses Scaramanga's anonymity and only known physical feature to get into contact with Scaramanga's current employer, the industrialist Hai Fat, though Scaramanga is already at Hai Fat's estate, and Hai Fat quickly guesses who Bond really is.

Later in the film, Scaramanga reveals to Bond that as a boy living in the traveling circus, he shot and killed an abusive animal trainer for killing an elephant that he had befriended. Scaramanga also demonstrates his marksmanship to Bond by using a Colt Single Action Army to shoot the cork off a bottle of champagne from long range (Scaramanga's golden gun in the novel is a gold-plated Single Action Army), claiming later that it was a toy.

Scaramanga lives very well, drawing from the exorbitant sums of money he charges to carry out his assassinations, and has built his home on his own personal island somewhere off the coast of southeastern China - paying for lease of the island and protection through assassinations ("favors") for the Chinese. Despite his assertion that "science was never [his] strong point," the island utilizes many aspects of modern technology, including its own self-sufficient solar power plant. In addition to the power plant, Scaramanga's home also includes a section which is something between a labyrinthine maze and a funhouse, where Scaramanga and his foes duel to the death. Nick Nack hires assassins to kill Scaramanga as a challenge to keep him on his toes. Scaramanga is well aware of and approves of Nick Nack's efforts, and wishes him better luck next time when his hired guns fail. Also, Scaramanga has a private jet, which Bond later steals to get off the exploding island. He also makes a will that if he is killed, Nick Nack will inherit his fortune as a motivation for Nick Nack to find a worthy opponent for Scaramanga to duel with.

Scaramanga also uses some of his wealth to finance research and development of technologies that rival those developed by MI6's Q Branch. Such technologies include a car that transforms into an aircraft and a solar-powered laser cannon.

Scaramanga was hired by Hai Fat to assassinate a British scientist named Gibson, who was thought to own solar energy information and technology crucial to solving the energy crisis. Gibson is assassinated and his invention, the Solex agitator, is stolen from the crime scene by Nick Nack. The Solex agitator is a critical component of Gibson's solar energy device.

However, instead of turning the device over to Hai Fat, Scaramanga instead kills Hai Fat with his golden gun and takes the device for himself. With it in his possession, it allows for him to sell the device to the highest criminal bidder or use it to power his personal solar energy cannon.

Scaramanga also desires to test his skills against the famed James Bond, whom he regards as the only man capable of being his superior. Besides the profit and/or power the Solex agitator can give him, Scaramanga's scheme in acquiring the device is also intended to lure Bond to Scaramanga's private island so that the two of them can engage in one final, decisive duel (Although Bond is using his eight-bullet .32 Walther PPK pistol while Scaramanga uses the golden gun, Scaramanga states that he 'only needs one', Bond's superior number of bullets being offset by Scaramanga's advantages of fighting on his own ground).

After taking Goodnight (Bond's semi-partner in the film) hostage and handing her over to his henchman Kra, Scaramanga lures Bond to his private island. Scaramanga seems excited about Bond's visit and gives him a tour of his plan for solar power. Bond has lunch with Goodnight and Scaramanga but Bond presses his luck which provokes him and Scaramanga into a duel. Once in the funhouse, Bond takes the place of a dummy "James Bond" and tricks Scaramanga into coming out in the open to look for Bond with his pistol drawn. Before he can react to the deception, Bond shoots Scaramanga in the heart with his .32 Walther PPK pistol. Scaramanga stares at Bond in disbelief, before collapsing to the ground, dead. 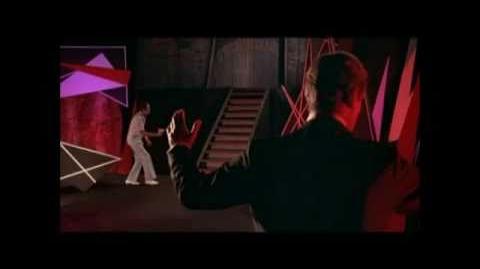