Frank (Once Upon a Time in the West)

Once Upon a Time in the West

Killing people as many as he can.

Kill McBain and his family for not moving off the land.

Frame Cheyenne in the murder of McBain and his family (all succeeded).
Kill Harmonica and Cheyenne and to continue his reputation as well as gain more and more money (failed).

Frank is the main antagonist of Sergio Leone's 1968 epic Spaghetti Western film Once Upon a Time in the West. He is a ruthless, selfish, and sadistic mercenary who was hired by the railroad tycoon Morton to manipulate McBain into moving off the land, but he killed him and his family instead, and has only one goal; kill Harmonica and Cheyenne.

He was portrayed by the late Henry Fonda.

Upon learning that a railroad would have to pass through Sweetwater (a piece of land near the town of Flagstone), railroad tycoon Mr. Morton sends Frank (his hired henchman) to scare Brett McBain (who has bought Sweetwater) away from the land. Instead, Frank kills McBain and his three children - and plants evidence, to frame the bandit Cheyenne (and his gang) for this heinous crime.

Later, when Morton asks him if it was necessary to kill them, Frank simply replies that people scare better when they're dying.

In the film's opening scene, Frank sends three men to pose as Cheyenne's men - and kill a gunman playing a harmonica, who is later given the nickname, "Harmonica". However, Harmonica kills the two men and informs Cheyenne that the gunmen Frank sent were posing as Cheyenne's men. Frank then later sends three men to kill Jill (formerly McBain's fiancée) - but Cheyenne kills these men.

Later, Frank turns against Morton - and later has sex with Jill, before forcing her to sell Sweetwater at an auction. He tries to scare the other bidders at the auction, so he can pick up the land cheaply for himself.

However, Harmonica arrives - holding Cheyenne at gunpoint - and manages to make a much higher bid, based on the reward money he would received from delivering Cheyenne to the authorities. Despite trying to scare Harmonica, Frank fails to do so - and Jill buys back the farm from Harmonica. After this, some of Frank's men finally turn on Frank himself - having been paid to do so, by Morton.

Harmonica kills them, so he can have the honor of killing Frank himself. With Morton and the rest of Frank's men having been killed in a battle with Cheyenne's gang, Frank goes to Sweetwater and confronts Harmonica. On two occasions, Frank has asked him who he is - but, Harmonica simply refuses to answer. Instead, he names men who Frank has murdered.

Eventually, Harmonica's motive for revenge against Frank is revealed: When Harmonica was younger (a teenager), Frank forced him to keep his brother from men while he was hanging. After Harmonica collapsed with exhaustion, his brother was hanged.

Harmonica draws his gun first, and shoots Frank - and, after Frank asks who he is (for a third time), Harmonica puts a harmonica in the dying Frank's mouth. Frank nods (finally recognizing who he is) and dies. 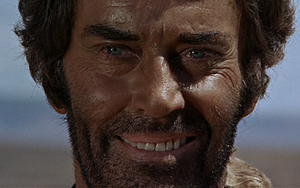 Frank as a bandit, in the flashback.