For the film version of Major Frank Burns, see here.

Remove Henry Blake from command and take his place (failed; although Blake was discharged).

Major Frank Burns was a major antagonist in the first five seasons of the war-comedy drama TV series, M*A*S*H. He is a surgeon and medical officer in the Korean War, serving in the United States Army as second-in-command of the 4077th Mobile Army Surgical Hospital.

He was portrayed by the late Larry Linville.

From the very first episode, Burns was a chronic annoyance of both the acerbic Hawkeye Pierce and the much put-upon CO, Lieutenant Colonel Henry Blake. There was almost no action anyone could take, silly or serious, that did not end up in one of his reports. He was, in fact, a pain on many levels, the saddest of which was his less-than-stellar surgical skills and almost non-existent devotion to his young wounded charges.

Burns was on the receiving end of some borderline-cruel pranks and remarks, but even if these were somehow disproportionate, he was not a man to draw out people's better natures. He was short with the enlisted personnel and treated them shabbily, while his barking at the nurses sometimes made the sexist banter of Pierce and Trapper John McIntyre seem tame by comparison. His open contempt for Colonel Blake regularly topped both the war itself and Pierce's escapades in making the CO's day difficult. Blake once said that Burns went over his head so often, his scalp had blisters. His rotten bedside manner once got him taken as a hostage in the shower by a battle-fatigued soldier he had mocked and derided for not wanting to go back to combat. Once, when Corporal Max Klinger belted Burns after a confrontation, everyone in the Post-Op Ward—nurses, corpsmen, and patients—erupted in cheers.

While not as hateful as some, Frank often also showed an astonishing amount of bigotry towards almost anyone who wasn't a match for his definition of a 'true American.' While his attitudes were likely historically correct for many people in the real world during this era, in the world of the 4077th, enlightened by the savagery of war, he was more than just a throwback. The views he held on Koreans and other Asians were almost neolithic, and all the various ethnicities within the camp staff felt the sting of his views, sometimes even Father Mulcahy (being of Irish descent).

One of his biggest hypocrisies concerned his preaching about the sins of others, particularly the womanizing of his fellow doctors, while carrying on a relationship with Head Nurse Margaret Houlihan, at that time quite preachy herself—this despite Burns' having a wife and children stateside. While the very married Blake and McIntyre could be called on the same carpet, they at no time lied to the nurses whose company they kept, feeding them false promises of possible marriage, and still loved their wives, keeping their activities a secret for fear of hurting them, other consequences aside (in fact, Henry's wife also cheated on him while he was away, and Trapper's marriage dissolved post-war for unrelated reasons). Burns not only strung Margaret along with the possibility of him leaving his wife, but his was a loveless marriage where he lived in fear of his wife (or rather, the fear of losing his wife and her money), and likely had the disdain of both her and her family.

Frank's gung-ho attitude surprisingly did not gain him any friends, even among those military officials disturbed by the lack of proper discipline and the strange behavior of the 4077th staff. Even those repulsed by Pierce's anti-military attitudes and sometimes-childish escapades deeply respected his surgical prowess and deep commitment to the wounded soldiers. Burns and his constant snitching became so much background noise to them, and his endless reports were nearly disregarded, especially after his failed attempt to unseat Colonel Blake by going so far as to accuse him of lending aid and comfort to the enemy. One General irritated by Burns suggested Blake give Burns a high colonic followed by sending him on a 10-mile hike. Blake indicated wanting to be rid of Burns on many occasions but cited paperwork and the challenge of finding another semi-competent surgeon to replace him. Burns was such an incompetent physician that, despite being higher in rank, Blake made Pierce Chief Surgeon over him, a slight Burns never forgave. On more than one occasion, Burns' blindly cheerleading the Army's often circuitous way of doing things made various crises all the more aggravating.

This is not to say that Burns never showed any humanity. There are scant few instances of this, including one in which he did not attack Pierce for a surgical error after Pierce had done so to him many times. Frank only rarely ventured into monster status, and never into complete-monster territory. Another time Burns showed a rare display of humanity was when he learned of Henry Blake;s death, as we can see him freeze up and start to cry with the rest of the cast.

After Henry's departure from the 4077th, Burns' tenure as Commanding Officer did not last very long at all. Within weeks, he was replaced by Regular Army (non-draftee, non-ROTC, long-serving) Colonel Sherman T. Potter. If nothing else about Burns ever really changed, one thing did: Potter, no-nonsense and respected by his fellow officers, got no reports written about him. Still, Potter was unable to lance that boil entirely. Stinging from being replaced, Burns made disrespectful and pejorative comments about Potter's age to his face, and even more contemptuous ones when he wasn't around. In return, Potter told Burns exactly how little regard he held for him. In one instance, Burns' ineptitude as temporary CO led to him flailing about and getting himself knocked out cold. He then accused Pierce of outright mutiny, a court-martial offense punishable by firing squad. Once more, the preponderance of evidence had the army siding with the irreverent Pierce rather than the gung-ho Burns.

When Margaret Houlihan returned from Tokyo engaged to be married, what was left of Frank's world crumbled apart so hard and so fast, even Pierce and his new cohort Captain B.J. Hunnicutt showed sympathy and backed off. Sharp exchanges between the former lovers left Frank in an ever-greater spiral. Frank ended up providing the push that got Margaret's foot-dragging fiance to the altar, but right after the newlyweds left, he fell completely apart. Going AWOL from a leave in Seoul that had expired, Frank engaged in a campaign of drinking, unbecoming and inhospitable behavior, and chasing everything female and blonde that resembled his lost love. After harassing a general and his wife in a public bath, Frank was at last arrested and subjected to psychiatric observation. Burns was additionally permanently transferred away from the 4077th, to which Hunnicutt exclaimed that it reduced the enemy to just North Korea.

In one last phone call with the 4077th, Frank revealed that the army had cleared him of the charges, promoted him to Lieutenant Colonel, and sent him to a VA hospital back in his native Indiana. Pierce reacted to this news by throwing the phone equipment out the door of Radar's office (of course, Burns was known for gross exaggeration when it came to his personal life, so all of this could have been his deluded imagination).

Larry Linville played Frank Burns one last time, at least in name, in a parody on The Howard Stern Show. Burns was the central character in MASH's arguably worst episode, Major Fred C Dobbs, in which, in order to avoid the chaos caused by Burns' and Houlihan's demanded transfer, Pierce and McIntyre tricked the pair into thinking there was gold in the campgrounds. Cited by critics and the show's own staff as their weakest entry, the need for a good villain was demonstrated by the out-of-character actions of Henry, Hawkeye, and Trapper in keeping Burns around.

Like many show alumni, Burns was referred to but never appeared, in the very brief sequel series, AfterM*A*S*H. 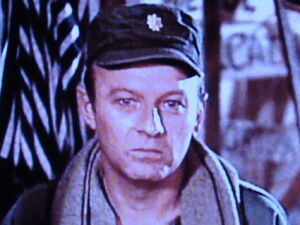 Retrieved from "https://villains.fandom.com/wiki/Frank_Burns_(television)?oldid=3773251"
Community content is available under CC-BY-SA unless otherwise noted.