Escape from the Cenobites and Pinhead.
Restore himself to life (all initially succeeded but ultimately failed).

Frank Cotton is a major antagonist in the Hellraiser franchise, being the main antagonist of the 1986 horror novella The Hellbound Heart, and its 1987 film adaptation Hellraiser, and a minor yet pivotal antagonist in Hellbound: Hellrasier II.

Frank is the brother of Larry Cotton. Frank, believing that he has experienced everything the world has to offer, buys the Lament Configuration puzzle box from a merchant in Morocco and brings it back to his dead mother's home in America. Solving the puzzle box, Frank opens a portal and summons the Cenobites who transform the house into Frank's personal Hell and tear him apart with their hooked chains. After he was in pieces and fully in the control of the cenobites, they take him and his Hell back to Leviathan. His brother, Larry moves in with his wife, Julia as they shared the house with Frank occasionally.

When Larry cuts his hand on a rusty nail and bleeds all over the spot where Frank was ripped apart, Frank manages to escape Hell. He then begins to regenerate flesh. A heavily decayed being, Frank reveals himself to Julia who had a previous relationship with him, and promising his love to her again, manipulates her into bringing him sacrifices to feed his hunger and regenerate his old body. Julia brings Frank at least three men as sacrifices, but after an encounter with his niece Kirsty Cotton, in which she catches him draining one of the victims, he tries to rape her but he loses the Lament Configuration. Kirsty escapes but passes out and is taken to a hospital. Once she accidentally summons the cenobites, cenobites, Pinhead, Butterball, Chatterer, and Female, she bargains with them to deliver them Frank in return for sparing her soul. In the meantime, Frank kills and takes the skin of Larry to complete a human visage and disguises himself for Kirsty when she arrives home.

Frank has sex with Julia and not too long before Kirsty returns to the house. Frank tries to trick her into believing that he's her father before she discovers the truth about Frank and that he and Julia killed her father. Now the enraged Frank, whose skin was made imperfect from a scratch from Kirsty, tries to kill her with his switchblade. While coming at Kirsty, Frank accidentally stabs Julia instead and leaves her to die, but she manages to drag herself to her room with the Lament Configuration where she personally summons the cenobites and they string her up with multiple hooks while she dies slowly and painfully. Meanwhile, Frank chases Kirsty around the house and is eventually caught by the Cenobites after Kirsty tricked Frank into revealing himself and the cenobites rip Frank apart with their many hooks, sending him back to Hell.

Later, after Kirsty has been institutionalized, Frank appears before her, pretending to be her father and leaving her a message written in his own blood asking for help. This makes her believe that her father is trapped in Hell and Kirsty goes in to save her father unbeknownst to her that she was really going after her twisted and insane uncle. When Kirsty enters Hell, she finds herself in Frank's personal Hell, a chamber filled with writhing female forms where Frank can never sate his lust. Attempting to rape Kirsty, Frank loses his human appearance. Kirsty causes him to catch on fire and Frank is finally defeated. Julia appears and after Frank beckons her to him, she tears his heart out from his back and quoted what Frank said when he first betrayed her (There's nothing personal, babe). 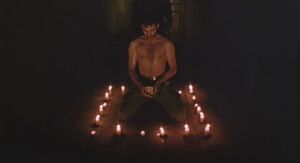 Frank with the Puzzle Box. 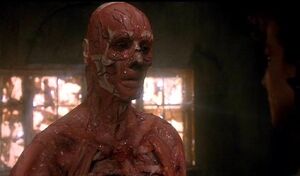 Frank as a Zombie 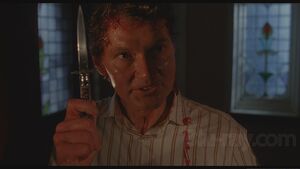 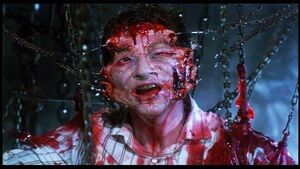 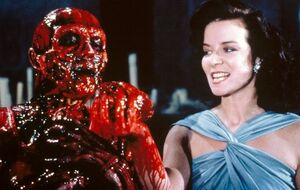 Retrieved from "https://villains.fandom.com/wiki/Frank_Cotton?oldid=4300777"
Community content is available under CC-BY-SA unless otherwise noted.