Frank Edward "Fitz" Fitzsimmons was a secondary antagonist in the 1992 film Hoffa. He is the corrupt leader of the Teamsters Union who helps Jimmy Hoffa in his rise to power.

He was portrayed by the late J. T. Walsh, who also played Matthew Markinson in A Few Good Men, Warren "Red" Barr in Breakdown, Charles Bushman in Sling Blade, and Martin Swayzak in Backdraft.

Fitzsimmons was a young dock worker who came to know the Teamsters union organizer Jimmy Hoffa in the early 1930s when Hoffa tried to organize the dock where he and Bobby Ciaro worked.

Over the years Fitzsimmons became one of Hoffa's most important union allies as Hoffa rose steadily in power and influence, eventually becoming President of the International Brotherhood of Teamsters. At Hoffa's orders Fitzsimmons purged the head office of those not loyal to him and brought in a staff apparently loyal to Hoffa.

When Hoffa and Ciaro went to prison after being convicted of racketeering, Hoffa designated Fitzsimmons as President of the Teamsters while Hoffa was in prison. Fitzsimmons proved to be far easier to control than Hoffa. He stopped working as hard to get Hoffa out of prison once he settled into the Presidency. Using allies in the Nixon White House the mafia engineered a release for Hoffa, but it came with a price - Hoffa was barred from union activities for ten years.

Hoffa was not pleased that Fitzsimmons had taken the Presidency from him and began working to get the ban on his being part of the Teamsters overturned. However by then the mob had tired of Hoffa and when Hoffa threatened to go public with damaging information the mob had Hoffa assassinated at a diner outside of Detroit, leaving Fitzsimmons in charge of the Teamsters. 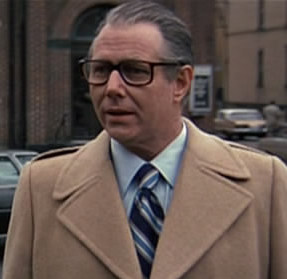 An older Fitzsimmons
Add a photo to this gallery
Retrieved from "https://villains.fandom.com/wiki/Frank_Fitzsimmons?oldid=3824047"
Community content is available under CC-BY-SA unless otherwise noted.