Leader of the Sharks

Worker at a Burger Shop

Frank Fly (Frank-Sama in Japanese) is the leader of the gang, known as the Sharks and a minor antagonist in Earthbound.

Frank is a fair-skinned blond man with mohawk. He wears black sunglasses and a red tuxedo.

Frank Fly first appears in an arcade, after Ness defeated one of the Sharks. He either attacks Ness with knives or he says something nasty to him. After he is defeated by Ness, he uses his robot, Frankystein Mark II to defeat Ness. After Ness destroys the robot, Frank tells Ness about a Sanctuary location which is guarded by the Titanic Ant. Frank starts working at a Burger Shop.

Frank appears near the end of the game when he prays to help Ness defeat Giygas. 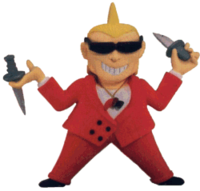 Official clay model of Frank Fly.
Add a photo to this gallery

Retrieved from "https://villains.fandom.com/wiki/Frank_Fly?oldid=3428606"
Community content is available under CC-BY-SA unless otherwise noted.