Kill Muscle Man as revenge for wining the trailer from him (failed).

Frank Jones is a minor antagonist in Regular Show, appearing as the main antagonist in the episode "Trailer Trashed". He is also the second archenemy of Muscle Man.

He voiced by the late John Cygan.

He wears a white suit and shirt, brown pants, and black tie. He has brown, shoulder length hair and a goatee. He also wears glasses. During the hotdog eating contest, he wore a white tank top and didn't have any glasses.

Frank Jones participated in a hotdog eating contest with Muscle Man. Using the water technique, Muscle Man successfully won the contest and a new trailer while the latter was empty. He decided to lie down at City Dump, where he met a group of men and was later considered his army. He promised to get a trailer from Muscle Man.

Frank went to The Park hiding as a health inspector. After "checking" the Park, he saw the trailer. He painted the trailer door after looking inside, and planned to take it to the dump, leaving Muscle Man confused. However, Benson told Frank that Muscle Man needed twenty-four hours to get the trailer "up to code", which Frank accepted. Park workers work and work day and night to perfect the trailer. The next day, Frank arrived with his two henchmen. He was generally impressed with the effort they put into the trailer, but he said he still had to fail Muscle Man. As he pointed to the parts of the trailer that were not up to code, the henchmen meant that those parts were in that state (including himself). Muscle Man punched Frank in the face, refusing to let go of his trailer.

Frank and his henchmen retreated to City Dump, and combined his army. They go to the entrance of the Park, and Frank orders the Muscle Man to hand over the trailer, or commit violence and horror. The Muscle Man replied, "Do you know who else is leading the violence and horror?" MY MOM! ". He then led the workers to the park (except Fives) on the way to the border. Frank's army chased them, having all the workers in the park half defeated but all the rest of Frank’s gang were fully defeated and killed during the chase. In a fit of rage with Muscle Man and himself left, Frank told him he was not a health inspector, but that he was the runner-up of the hotdog eating contest Muscle Man won the trailer.

He then said he should not have won because of the use of water to rot the hotdogs, but Muscle Man's response to using that kind of approach was allowed because "that's how Japan wins all the time!" During the fight and heading towards a cliff, Muscle Man decided to let Frank "own" the trailer, before disabling the truck's steering wheel with his shirt and ripping off the break pedal. Frank climbed in the back to pick it up, only to discover it being a prank established by Muscle Man. He was last seen falling into a ravine with the truck, before he was destroyed. 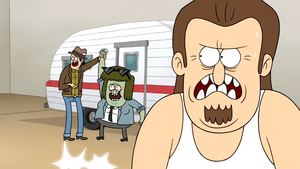 Frank Jones in the past, as Muscle Man wins the trailer at the hot dog eating contest as Frank starts to hold a huge hatred towards Muscle Man for winning the truck when he really wanted it. 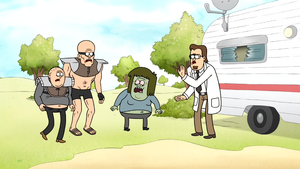 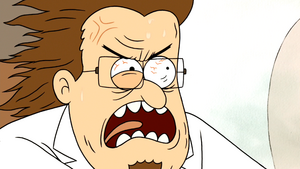 “GIVE ME THAT TRAILER!” Frank Jones’s villainous breakdown, as he gets really angrily desperate to win. 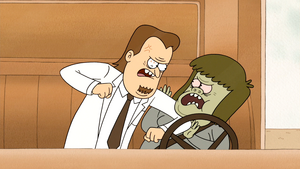 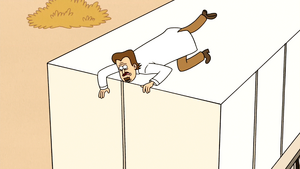 Frank climbing to the back of the truck, foolishly trying to get the trailer while the truck was heading towards a ravine. 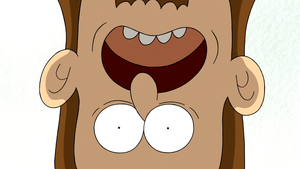 Frank discovering the trailer is gone as Muscle Man planked him. 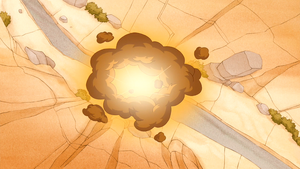