Steal things from other people.

Frank Sahwit is an antagonist from the video game Phoenix Wright: Ace Attorney. Specifically, he is the main antagonist of the very first case, The First Turnabout. He appears again in Gyakuten Kenji 2/Ace Attorney Investigations: Prosecutor's Path as a supporting antagonist.

Frank was just a common burglar that usually invaded apartments while their owners were away. One such day, he saw a guy leaving from an apartment room and decided to enter the place to steal. However, the owner of the room, a girl named Cindy Stone, saw him stealing her goods. Frank panicked, taking the nearest object to murder her. The object was a statue-clock in the shape of The Thinker. With no options, he decided to pin the murder on the guy who was previously there, who happened to be Larry Butz, the boyfriend of the girl. He offered his testimony to accuse the guy, posing as a newspaper seller. During the trial, he was called to court to offer his testimony, but the rookie attorney Phoenix Wright easily saw through his lies, unmasking Frank and saving his friend, Larry.

Sahwit incoherently mumbles parts of sentences while he desperately tries to think of another lie, while pictures of the crime flash behind him. He eventually loses his composure and throws his toupée at Phoenix in anger. He then shouts out, "Shutup!" multiple times, and even says, "I hate you!" to Phoenix. Sahwit then concludes by frothing from the mouth and fainting at the witness stand.

Frank appears during the second case, where he is shown paying his sentence in prison. He claims to be a model prisoner, taking care of the animals inside the prison, and training to be an animal groomer. He is the one who found the dead body of Horace Knightley inside one of the workrooms, but Miles Edgeworth interrogates him and discovers he was able to enter the room because his prisoner bracelet was broken. It is later revealed he worked as an accomplice to the prison's warden, Patricia Roland, helping her to smuggle goods inside the prison for Sirhan Dogen, which also allowed her to dispose of Knightley's body in the prison.

In his first appearance, Sahwit is an obsequious, sycophantic, unctuous, smarmy, and nosy man. However, he is shown to hide a deep anger problem. He has a habit of telling fairly transparent lies, then having a strong feeling of displeasure when he is entered into the competition. In many instances, his words unintentionally reveal his excellent poker face, thereby giving away his true nature.

In his second appearance, all efforts as a model prisoner are just a front to make certain that his prison sentence is made smaller. When his sentence was made larger due to his actions as the accomplice of Roland, he flies into a wave of uncontrollable anger and admits that he did not actually care about animal grooming. 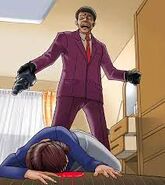 Sahwit committing the first murder in the series.