Coercing CJ to perform his own missions under the threat of killing him and his family.

Corrupting Los Santos by expanding the crime and drugs.
Manipulating his assets and later killing them upon viewing them as a threat.

Eliminate all loose ends that threaten to expose his corruption.

Kill CJ and his brother Sweet Johnson (both failed).
Have Jimmy Hernandez and Ralph Pendlebury murdered to prevent them from exposing his nefariously corrupt activities that solely involve C.R.A.S.H. (succeeded).

Frank Tenpenny, also known as Officer Tenpenny and sometimes called Frankie, is the main antagonist of the hit 2004 video game Grand Theft Auto: San Andreas. He is the ruthless, manipulative and nefarious leader of the CRASH Unit and a senior corrupt police officer of the LSPD and he is Carl Johnson's archenemy.

He was voiced by Samuel L. Jackson, who also played another corrupt police officer, Officer Abel Turner, as well as Richmond Valentine and Elijah Price among others.

Tenpenny was a corrupt cop working for the LSPD division, C.R.A.S.H. He has Eddie Pulaski and Jimmy Hernandez by his side.

He confronts Carl Johnson when he tries to get home, accusing him of bringing drug money. He and his accomplices take him to Ballas territory and drop him there and frames him for Officer Ralph Pendulbury's murder (who threatened to expose the units true motives and was killed by Jimmy Hernandez on orders from Tenpenny) which allows Tenpenny and his henchmen to manipulate CJ for quite some time,  From that point, Tenpenny and his henchmen would appear in various points such as telling CJ and Ryder about a train with weapons would be coming, leaving Big Smoke's house, and ordering CJ to kill a foreigner in a warehouse. Later he and Pulaski assist the Ballas run drugs in Los Santos

Later, he is seen in the garage of the Green Sabre with Big Smoke and Ryder, revealing that Tenpenny had orchestrated the hit that would kill CJ's mother (the actual target being Sweet, CJ's older brother and leader of the GSF), crossing the Moral Event Horizon. After a gang fight with the Ballas with ended with Sweet being shot, Tenpenny arrests CJ and takes him into the mountains. From that point on, he orders him to murder or arrest anyone who would try to expose his evil deeds or he will have Sweet be put in a Ballas cell block.

Tenpenny has CJ meet him and Pulaski in the deserts in Las Venturas where Tenpenny attacks Hernandez for betraying him and orders Pulaski to kill him and CJ. He leaves them there where Pulaski is later killed by CJ.

Later, it is mentioned that he gets into court and he and Pulaski (unless CJ knows otherwise who previously killed Pulaski) were charged with corruption, sexual assault, narcotics and racketeering, but the charges are dropped to the murders or disappearances of the people who try to expose him. This triggered a riot in Los Santos, meant to be a rather obvious nod to the infamous 1992 Los Angeles Riots. Tenpenny confronts CJ in Big Smoke's hideout, telling him he plans to leave town. On the top of that, he has new recruits. He attempts to kill CJ by shooting him with a shotgun, but CJ tricks Tenpenny by yelling Sweet's name thinking Sweet is behind him and CJ was able to miss Tenpenny's gunshots, he then attempts to kill him in an explosion of the hideout, but failed as CJ was able to escape unharmed. Sweet doesn't accept his getaway so he climbs up to his firetruck. CJ rescues him and battles Tenpenny through town shooting at cops trying to kill them. Eventually Tenpenny loses control of the firetruck which ends with the firetruck falling of a bridge and crashing into the GSF territory. Tenpenny climbs up the wreckage and rants about how he should clean town of crime before finally dying of his wounds.

CJ was about to shoot Tenpenny but Sweet tells him not to, leaving it as "he killed himself in traffic accident no one to blame" so the Grove Street Families would not be involved with Tenpenny's death and leaves the scene of Tenpenny's death to go get something to eat, CJ then confronts the now deceased Tenpenny one final time he points his finger and circles it over his head sarcastically saying "see you around... Officer". He the goes joins the others to get something to eat.

It was later revealed that after the riots were over Tenpenny's corpse was mutilated and stripped by the homeless.

Frank is a corrupt police officer, and is depicted as a very violent, sadistic, callous, and impulsive man. He often used Carl as his "dog" and is also quite arrogant and ruthless and is easily angered if things doesn't go pretty well. He also had helped both Vagos and Ballas to weaken both Aztecas and GSF in order to gain more power and respect from them instead of preventing them from committing more crimes.

At the start of the game where CJ is arrested, Tenpenny says to CJ, "Welcome home Carl, glad to be back? You haven't forgotten about us, have you boy?" Carl replies with, "Hell no, Officer Tenpenny, I was just wondering what took y'all so long." Tenpenny claims that his approach to the job is about "percentages" and that his philosophy calls for overlooking some crime to achieve a greater good. It appears that he believes what he says, but in reality Tenpenny and his unit are corrupt to the core and terrorize gang leaders in a fashion much like a gang themselves, except with the power of law enforcement behind them. They can kill indiscriminately and are skimming the profits from the rival gangs. Tenpenny himself is a polluting influence, convincing good cops to abandon their ideals and assist in his crooked and self-serving pursuits. He shows a callous disregard for the people surrounding him, particularly those like Carl whom he has power over. He sees such people as tools and eliminates all of those who either outlive their usefulness to him or get in his way, even including his own fellow officers. Tenpenny exhibits megalomania and considers himself above the law. He believes that because he does good work, he is entitled to enrich himself at the city's expense.

Frank Tenpenny also appears to have few qualms in abusing people verbally or physically and seems to be fond of practicing brutality on others. Before the final mission, End of the Line, he realized that Carl has "gone away from him" and decided to eliminate him, which shown in the End of the Line, he attempted to kill Carl by using his shotgun but fails to do so. 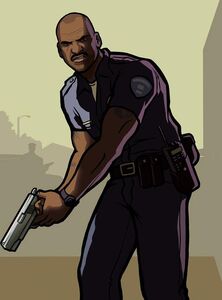 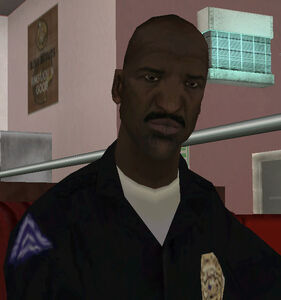 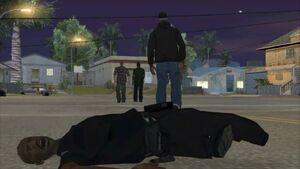 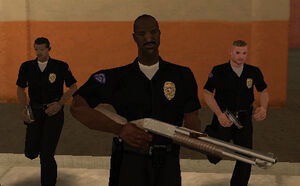 Tenpenny and his henchmen

Tenpenny's death.
Add a photo to this gallery

Retrieved from "https://villains.fandom.com/wiki/Frank_Tenpenny?oldid=3555579"
Community content is available under CC-BY-SA unless otherwise noted.