Member of the Manipulated Dead

Save the universe from destruction (succeeded).

Franklin Anderson Jr., or also better known as Frank the Rabbit, is the main antagonist of the 2001 independent science-fiction film Donnie Darko.

As a member of the manipulated dead, Frank's objective is to guide Donnie in his path to correcting the timeline of the primary universe by returning the jet engine to its original universe.

Although possessing noble goals, Frank's methods of achieving these goals cause him to corrupt and torment the film's titular protagonist.

He was portrayed by James Duval.

In the middle of the night, on October 2, 1988, Donnie is awakened from his sleep by a strange voice and led out onto a golf course where he converses with a life-size demonic-looking rabbit named Frank who tells him that the world will end in 28 days, 6 hours, 42 minutes, and 12 seconds, Donnie then falls asleep after being told this. After waking up on the golf course the next morning, Donnie returns home to discover that a huge jet engine has fallen from the sky and into his bedroom. The next night Frank appears to Donnie and makes him flood his school.

Frank appears again to Donnie in the mirror of his own bathroom, Donnie touches the force field separating them as they converse about the world ending. Donnie then tries to figure out how Frank's powers work, to which he gets no reply. Donnie then asks where he came from, to which Frank replies "Do you believe in time travel?". Donnie's younger sister then comes in the bathroom, and Frank vanishes.

Frank appears later on, at a movie theater. Donnie questions him on why he "wears that stupid bunny suit", to which Frank replies "Why are you wearing that stupid man suit?". Donnie then tells him to take it off. Frank takes off his mask, revealing a man with a bullet hole in his right eye. Donnie asks him what happened to his eye, to which Frank replies "I'm so sorry.", referring to his remorse to a future event in the film. Frank then tells Donnie to burn down Jim Cunningham's house, and Donnie does so without hesitation, which ends up revealing the man to be a pedophile.

Frank then appears in the bathroom again. But this time Donnie has a knife and stabs the force field separating him and Frank repeatedly. Eventually causing Frank's right eye to glow, foreshadowing his fate later in the movie.

Later, when Donnie goes to a psychiatrist, he sees Frank again, who simply stares at him, freaking Donnie out. Frank then looks at the sky, revealing to Donnie that the sky is going to open up. Frank then vanishes again.

It is revealed that Frank is Donnie's elder sister Elizabeth's boyfriend, who (while out on a beer run) accidentally runs over Donnie's girlfriend named Gretchen. Upon the sight of this, he is shot in the eye by Donnie to avenge the death of Gretchen.

At the end of the movie, Donnie is able to return the jet engine to the primary universe as he witnesses the start of the collapse of the parallel universe in which the events of the last 28 days took place, and he himself is returned to October 2 to wait for the jet engine to crush him. This shows that Frank was actually a beneficial force seeking to prevent the destruction of the universe.

In the primary universe, Elizabeth's boyfriend Frank is alive again, but he is shown touching his eye showing that he is still haunted by the now distant memories of the tangent universe in his dreams. 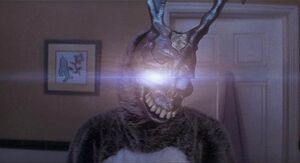 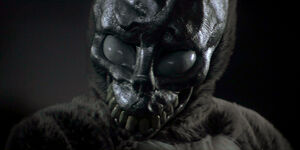 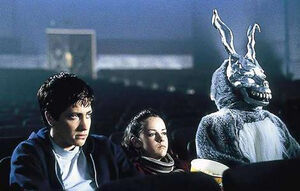 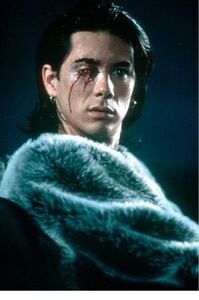 Frank without the mask. 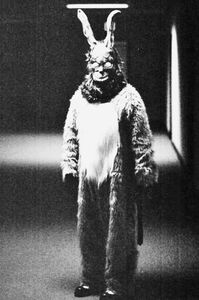 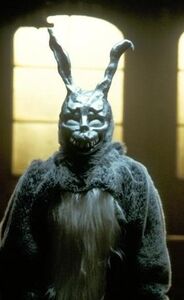 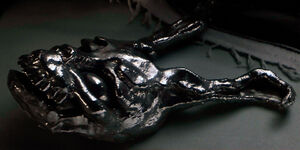 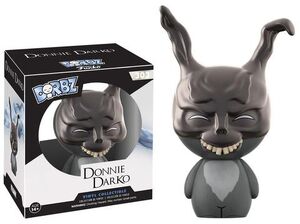 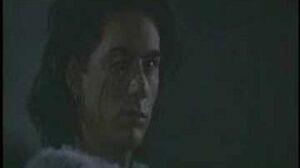