Working at the Steelworks.

Keep engines to stay at The Steelworks by any means necessarily to help her and Hurricane.

Frankie is the main antagonist of Thomas & Friends: Journey Beyond Sodor.

She was voiced by Sophie Colquhoun.

When Thomas arrived at the Steelworks, looking for Bridlington Goods Yard to deliver his Troublesome Trucks, Frankie, along with Hurricane, patronised Thomas so he would not leave them and that he could take a look inside the Steelworks. They began singing about how exciting the Steelworks is, to try and persuade Thomas to stay there. Their singing made Thomas feel excited about being there, and he agreed to stay.

The following morning, Frankie and Hurricane soon put Thomas to work; they convinced him that because they helped him, he should help them in return. Thomas set to work carrying molten slag out of the building and to a pit. Frankie agreed that he was very good at it, and said that he was her favourite new engine. Frankie later thanked Thomas for being there because now she and Hurricane could do more deliveries. Thomas soon wanted to go home, so Frankie, again, convinced Thomas that because he helped them, he must stay and continue to help them out, and they left him all alone in the Steelworks.

Thomas found what he thought was a way out, but he ended up derailing on some old and unused track. Soon, Frankie and Hurricane came to his rescue, both disappointed that he tried such a stunt and Frankie scolded him that he had left them both to do all the work when they have other jobs to do if he left and Thomas was brought back to the Steelworks. Later that night, Thomas again tried breaking out of the Steelworks, ramming some flatbeds into the gate, using the cover of a thunderstorm to conceal his escape attempt. The sounds woke Frankie and Hurricane up, raising the alarm, and they immediately told him to stop, but Thomas broke through the gates and rushed away, and she and Hurricane chased after him.

Frankie and Hurricane were unable to find Thomas but were able to find his friend James who had also come looking for him. Frankie and Hurricane later tried to convince James that the Steelworks was the place for him with their singing, but James was not convinced and demanded to know where Thomas was. They pretended that they did not know him until James pointed out that Hurricane had delivered his trucks. They realised that James had seen through their fib, and admitted they do not know where he went. After James then said he must go find him, Frankie again lied that he was coming straight back and they made him stay and get to work.

When Thomas returned to the Steelworks with three experimental engines named Lexi, Theo, and Merlin, Theo and Lexi provided a distraction to draw Frankie and Hurricane out of the Steelworks, and this allowed Thomas to slip inside unnoticed. However, Frankie and Hurricane were not taken by the distraction and soon noticed Merlin trying to sneak inside the Steelworks to help Thomas. They followed him inside and then saw Thomas trying to convince James to leave with him.

Seeing their two "friends" betray them, Frankie and Hurricane began forcefully attempting to make Thomas and James stay. Frankie ran straight up behind James in an attempt to derail him, but James narrowly avoided the impact. Frankie and Hurricane followed James inside and repeatedly tried to stop him, but James kept dodging their attempts. Thomas and Theo cleared James' track while Lexi and Merlin blocked Hurricane and Frankie inside, and James managed to escape the building, but the trucks Theo was pushing hit a control panel and a magnet picked Thomas up, suspending him over a vat of molten slag. Theo tried to get Thomas down, but Thomas was dropped towards the molten slag, only to be knocked away by another bucket at the last minute. Thomas hit some more Ladle Trucks, and the slag poured onto the floor, dangerously close to Thomas. Hurricane rocketed to Thomas' rescue, shoving him out of the way of the slag, but his back wheels were caught and began to melt. Frankie was horrified, as she did not know what to do, but thankfully, Merlin shoved Hurricane out of the slag, saving his life.

Frankie was now very unhappy, as now Hurricane was out of commission and the engines were about to leave them with no help at all. James and Lexi scolded her for all that she and Hurricane have caused, prompting Frankie to admit that they only wanted someone to help with all the work, and no other engines were available. Thomas had an idea and said that he knew some engines who were not as busy as she thought: the experimental engines. Although reluctant at first, Merlin, Theo and Lexi agree to stay and help make deliveries.

While Hurricane was having his wheels replaced, Lexi, Theo and Merlin started settling in with their new lives at the Steelworks helping Frankie. He then later joined in once again once his wheels were repaired.

At first glance, Frankie appears to be an honest, friendly, empathetic, and helpful diesel shunter. But underneath her benevolent and charming outside, she is a devious diesel engine. She is very controlling and manipulative, and can act rude to others. Several times throughout the entire movie, she tries to convince Thomas that he must stay and help her because she and Hurricane helped him.

When Frankie is pushed to the limit, she acts very aggressive and recklessly. When she found that Thomas and James were attempting to escape the Steelworks, she and Hurricane began forcefully attempting to trap them by any means necessary, whether by chasing or derailing them.

However, underneath that temperamental, apathetic, and crafty exterior, it is revealed that she only acts the way she does because she just wants help from the other engines due to the busy work schedule that she and Hurricane currently have. 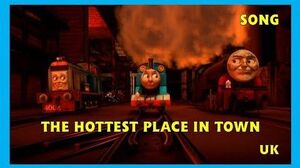 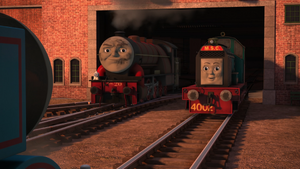 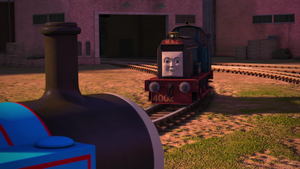 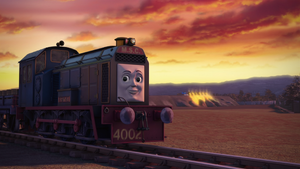 Retrieved from "https://villains.fandom.com/wiki/Frankie_(Thomas_%26_Friends)?oldid=3819214"
Community content is available under CC-BY-SA unless otherwise noted.