Franklin Bordeau (or simply Franklin) is an antagonist in the manga and anime Hunter x Hunter. He is a member of the Phantom Troupe, and is one of the original members.

Franklin was one of the original members of the Phantom Troupe, and was recruited by Chrollo Lucilfer in Meteor city. He participated in the genocide of the Kurta clan.

Franklin went to Yorknew City with other members of the troupe. He got into an argument with Nobunaga about whether or not Hisoka was powerful, and the two of them got into a fight.

Franklin watched Shizuku lose in an arm-wrestling match with Gon. He stopped her from trying to get a rematch. Franklin helped attack the mafia's auction, and used his Double Machine Gun to kill many members of the mafia.

After Gon and Killua were captured, Franklin recognized them as the ones who arm-wrestled Shizuku, although Shizuku claimed not to know them, and Franklin decided it wasn't worth arguing with her. Franklin then participates in the massacre of the mafia.

After Chrollo used "Lovely Ghostwriter" to predict the troupe's future, Franklin's death is not foretold. When it is revealed that Hisoka gave the chain user information, Franklin stopped Nobunaga from attacking Hisoka, wanting to hear Hisoka's justifications.

After Chrollo was captured, Franklin was among the group that didn't think that Phinks should follow Pakunoda. He claimed he would stop Phinks if he tried. Phinks threatened to kill Franklin if Pakunoda didn't return, although Franklin didn't react. When Pakunoda returned, she used Memory Bomb to give information about Kurapika to Franklin and the other original troupe members, and then died.

Franklin was among the group that entered Greed Island. After realizing Greed Island was a real place, they tried to enter through the real world, but were stopped by Razor. They later tracked down Hisoka and asked him to hire a Nen Exorcist to heal Chrollo.

Franklin and the rest of the Troupe boarded the Black Whale to hunt Hisoka after he killed Shalnark and Kortopi. They got into a fight with the mafia, but agreed to work with them to get through the Black Whale and find Hisoka.

Franklin has a monstrous appearance, and seems to be modelled after Frankenstein's Monster. His face has many stitched up scars. He has very long earlobes. 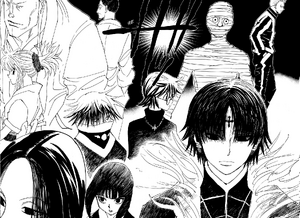 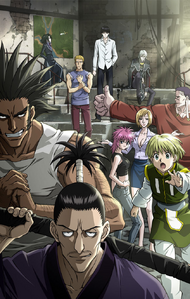 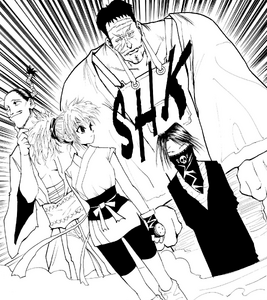 Retrieved from "https://villains.fandom.com/wiki/Franklin_Bordeau?oldid=3413441"
Community content is available under CC-BY-SA unless otherwise noted.