Making money through his businesses.
Hanging out with his friends.

Increase his power and reputation.

Franklin Clinton is one of the three playable protagonists in Grand Theft Auto V. He is an ambitious gangster and up-and-coming robber, who has been taken under the wing of criminal thief Michael De Santa and drug lord Trevor Philips. He is the archenemy of Devin Weston and Stretch.

He was voiced by Shawn Fonteno.

Franklin was born in South Los Santos with his best friend Lamar Davis and longtime girlfriend Tanisha Jackson. He never knew his father and his mother became a cocaine addict when Franklin was still young. Franklin's father left his mother while she was pregnant with Franklin and her addiction eventually led to her death when Franklin was young.

Following his mother's death, Franklin moved in with his grandparents. Despite being constantly spoiled by his grandmother, Franklin had decided to take on the role of a street hustler. One of his first jobs was selling cigarettes with Bradshaw. The scheme was successful until Franklin's grandfather caught them in the act. His grandparents later passed away, and Franklin's grandmother left him and his aunt, Denise Clinton, a house on Forum Drive in her will.

Franklin attended Davis High School along with Lamar, Tanisha, and Tonya, but he was expelled for assaulting a teacher. Around this time, he began the life of a gang banger and dope dealer, he and Lamar joined the infamous street gang known as "The Families", and started committing various petty crimes such as carjackings and small-time bank robberies with Lamar. However, Franklin's life of petty crime caught up with him when he was arrested and sent to prison. Sometime later, Tanisha left Franklin due to his gang lifestyle and the recent passing of her brother; who was involved in gangs. After his release, he decided to give up his previous gang life and get some proper work. However, his eventfully starts getting involved again as shown during the events of the game.

Franklin eventually moved beyond the role of ghetto-based street dealer when he and Lamar began working for Armenian gangster and con artist Simeon Yetarian. Yetarian owns a car dealership which acts as a front for a loansharking and extortion business. Yetarian's dealership sells cars to people who can't afford them and when they default on the exorbitant interest payments, Franklin and Lamar act as repo-men and repossess the cars. They also force people into accepting deals if they protest against Simeon's attempts at making them pay more than what their car is worth.

While recovering a high-end SUV sold to a young, naive rich kid named Jimmy De Santa, Franklin is surprised by Jimmy's father Michael; who had been hiding in the back seat and points a handgun to Franklin's head, only sparing him because he knew that he was only following orders. Under orders from Michael, Franklin smashes the car through the window of Simeon's dealership, receiving a payment from Michael himself for doing what he called "a job well done." Because Franklin had driven through the dealership, Simeon fires him as well as for covering Lamar's theft of the bike.

After losing his job, cutting ties with Simeon, and needing a source for money, Franklin started working with Michael who grew fond of him. Franklin helps Michael rescue Jimmy from his yacht; which was stolen during an attempted sale by the latter. Later, after Michael catches his wife post-coitus with her tennis coach, he and Franklin chase him to the deck of a Vinewood Hills house. Believing the house to belong to the tennis coach, Michael and Franklin use a pickup truck to pull the deck down, destroying the house. However, upon returning to the De Santa residence, they are met by Mexican-American gang boss Martin Madrazo, who reveals the house was his and demands $2.5 million in damages from Michael.

Unable to pay Madrazo due to low cash from debts, Michael contacts Franklin to enlist him on a high-end jewel store robbery, which Franklin accepts and sees as his first major opportunity to become a more successful criminal. The robbery is a success and effectively raises Franklin through the ranks in the criminal underworld. However, Michael's extremely psychotic and even more ruthless former best friend, Trevor Philips, shows up to his house after recognizing Michael's style of robbery on television and one of his catchphrases. Trevor's arrival puts a constant strain on Michael and Franklin, with Franklin usually acting as the intermediary between the two former friends.

However, Franklin and Michael help eliminate Trevor's rival Elwood O'Neil and his brothers Walton and Wynn. Eventually, the unlikely trio is forced to work for Steve Haines, a despicable and corrupt federal agent who works with Michael's former handler, Dave Norton. Franklin is used as a sniper to provide cover for Michael and Trevor as they go on several dangerous missions. He's also serves as the teams driver on many of the missions and heists they carry out; due to his excellent skills behind the wheel.

Soon after meeting Haines, Franklin and Lamar are introduced to one his associates, Devin Weston. Franklin and Lamar are tasked with stealing several high-end cars around the city for Weston, with the occasional help from Michael and Trevor, and are promised to get a large sum of money after they bring him all the requested cars. However, once all the cars are acquired, Weston cheats Franklin, Lamar and Trevor out of their payment, promising to "invest" it for them on his own company. This creates a huge enmity between Franklin and Weston.

Franklin is soon visited by his ex-girlfriend Tanisha, who has now fully left the gang life and is engaged to a doctor. She informs him that Lamar has been set up by former Families OG, "Stretch," who is secretly aligned with the Ballas. She begs him to save Lamar from an ambush because of the childhood bond she has with him and Franklin. Franklin then enlists the help of Michael and Trevor, before the trio storm the Ballas' ambush spot and save Lamar. After driving Lamar back to their neighborhood, Franklin is approached by Agent Haines; who orders him to kill Trevor Philips because of his unpredictable and uncontrollable nature.

Michael then recruits Franklin as part of his team to rob the biggest gold depository in the country for their last job before retirement. Depending on the player's choice, the heist either goes down smoothly with Franklin acting as the team's security hacker or one of the drivers of the gold. However, the team is ambushed and forced to fight off a group of mercenary's that are tracking Trevor before escaping with the loot; or the heist gets a lot of heat as Franklin drills a hole through the vault door to get the gold on a pair of helicopters with Michael acting as a decoy and distracting the attention of the law.

While relaxing at his lavish hillside house, Franklin is once again visited by Devin Weston, who orders Franklin to betray and kill Michael out of revenge for meddling with his businesses around the city. A disgusted Franklin orders Weston out of his house before he is left to make the decision of either killing one of his two friends or risking all their lives to go against Weston and Haines (which in turn also involves going against Stretch and Wei Cheng).

Option C is confirmed to be the canon ending, so leaving Micheal and Trevor alive and teaming up with his two friends to take care of all their enemies is the "true" ending to the storyline.

If Franklin chooses to act on Haines' orders to kill Trevor, Franklin calls Trevor and sets up a meeting with him. After a brief moment Franklin pulls a gun on Trevor who becomes enraged at once again being betrayed by a friend and flees the scene in his truck, shouting "You fuckin' Judas! You're just like him!". Franklin then calls Michael for help who shows up during the car chase and rams Trevor's truck into an oil tanker, gravely injuring Trevor and covering him in gasoline. At this point either Franklin or Michael shoots the gasoline which sets Trevor alight and eventually causes the tanker to explode which completely incinerates Trevor. Franklin and Michael then depart the scene, trying to justify to themselves the murder of their friend. Michael comments that Trevor had no limits and no boundaries, before informing Franklin that surviving is winning.

Franklin calls a meeting with Michael in the desert after their big score. Michael arrives at first delighted at his retirement and that his daughter Tracy is now going to college, before he suddenly realizes Franklin is there to assassinate him. Franklin chases after Michael when the latter flees on foot into an old power station. Franklin finally catches up to Michael on one of the walkways of the station's chimney where Franklin knocks Michael over the railing. Franklin at first attempts to catch him where at this point he can either attempt to help Michael up or let him fall. Michael falls to his death regardless, headbutting Franklin if the "Save Michael" option is chosen.

Franklin decides to not betray his two friends and instead wishes to come up with a plan to take out Haines and Weston. For this, Franklin seeks the aid of his friend Lamar and the team's heist planner and expert hacker, Lester Crest, who hatches a plan to ambush both Haines and Weston's hit squads. On advice from Lester, Franklin calls Michael and Trevor and they all set up an ambush point at an abandoned refinery, where Lester uses his hacking skills to send all of the hitmen towards them. Haines sends a group of his corrupt FIB agents and Weston sends a squad of his personal mercenaries to the refinery where a massive shootout ensues between all parties.

With both hit squads terminated and the three protagonists still alive, they decide to kill all their enemies in one move before they know the hit failed. Trevor sets out to kill Haines and Michael volunteers to kill Stretch. Franklin goes to kill Triad leader Wei Cheng, who wants both Michael and Trevor dead in order to take over the drug trade in Blaine County, as well as vengeance for the murder of his business partner Elwood O'Neil and his brothers. Franklin sets out and finds Cheng where he promptly kills him and his entourage, including his son Tao. After killing Haines (and after Michael kills Stretch), Trevor then kidnaps Devin Weston and then brings him to a deserted cliff where Michael and Franklin meet him. Franklin then tells Weston he should have paid him for the cars he risked his life to steal for him before the three men execute the evil billionaire, Franklin then leaves the scene on good terms with his two friends.

Even though GTA Online takes places before and after Grand Theft Auto V, Franklin does not make an appearance in GTA Online. Lamar Davis, however, appears and mentions his friend Franklin to the player. 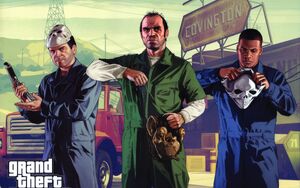 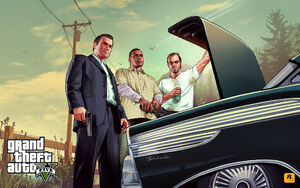 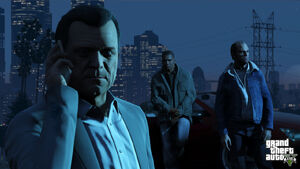 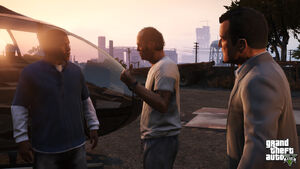 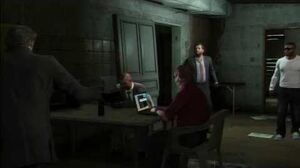 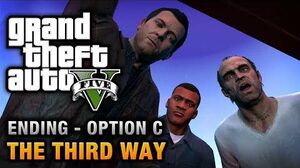