Villains Wiki
Register
Don't have an account?
Sign In
Advertisement
in: Marvel Villains, Agents of S.H.I.E.L.D. Villains, One-Shot,
and 24 more

Destroy the Gravitonium and send it to the bottom of the ocean along with Ian Quinn and his property (failed).

Dr. Franklin Hall was the main antagonist of the Marvel's Agents of S.H.I.E.L.D. Season 1 episode "The Asset", and a posthumous antagonist in the second half of Season 5. He was a S.H.I.E.L.D. scientist who tried to destroy Gravitonium to prevent Ian Quinn from weaponizing it.

He was portrayed by Ian Hart, who also portrayed Quirinus Quirrell and the voice of Lord Voldemort in Harry Potter and the Philosopher's Stone.

At the beginning of the episode, Hall was abducted by Ian Quinn to build up a generator device that could control the rare element Gravitonium, which can distort gravity when given an electrical pulse. Hall, as it turns out, sought to turn this generator into a bomb and destroy Ian Quinn's mansion due to him being a rich opportunity exploiter. Phil Coulson, who came to rescue Hall from Quinn, finds out about his plan while the control room for the generator made the two start standing on walls and the ceiling. Coulson shot a window and grabbed a wire to prevent from falling, but Hall fell into the generator and was consumed by the Gravitonium. It is later locked in the Fridge, a S.H.I.E.L.D. facility, when suddenly Hall's hand sticks out of the Gravitonium and is pulled back in, suggesting that he survived.

After the fall of S.H.I.E.L.D. during the civil war with HYDRA, turncoat John Garrett gives Quinn the Gravitonium for future experiments. However, after escaping from S.H.I.E.L.D. during Garrett's death and defeat, HYDRA associate Raina betrayed Quinn and allowed the element to absorb him because it "wanted" him. Therefore trapping him with Hall, further suggesting his survival.

Years later, Ruby Hale, a genetically engineered agent of HYDRA, infuses herself with a small percentage of the Gravitonium, fails to control the gravity-manipulating powers that she acquires, and can hear the voices of Hall and Quinn inside her head, driving her insane. After Ruby was killed by Yo-Yo Rodriguez, brainwashed military officer Glenn Talbot absorbed the element and successfully fused it with its powers. Afterwards, he silenced the voices of Hall and Quinn, while also collectively gaining their memories. After Quake killed Talbot to save Earth, Hall, Quinn along with anyone else that had been absorbed were killed as well. 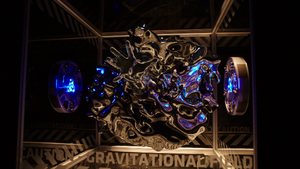 Hall trapped inside of the Gravitonium.