Kill anyone who knows his secret (especially Chris and Peter Griffin).

Kill John Silverbird once and for all (both failed).

Franz Gutentag is the main antagonist in the Family Guy episode "German Guy". He was an elderly puppeteer who befriends Chris Griffin. He had recently opened the Quahog Puppet Store. His fake last name comes from the German phrase for "good day". Herbert recognizes him as a former Nazi named Franz Schlechtnacht, which, in German means "bad night".

He was voiced by John Viener.

During World War II, he was a sadistic SS officer of a concentration camp in which Herbert was imprisoned. According to Herbert, those who Franz chose to put those on his left side would be sent to labor camps, and those on his right side were executed and also according to him, Franz is the most sadistic SS guard in all of Hitler's concentration camps. Franz forced Herbert to do recycling, which would leave his hands greasy and dirty.

After Chris and Peter learned that he really was a Nazi, he traps them in the basement. Franz and Herbert have a long drawn-out battle, Franz dies after falling off the porch stairs, unable to grab Herbert's hand. This proved Herbert right when before the battle, he said only one person would be leaving the house alive. 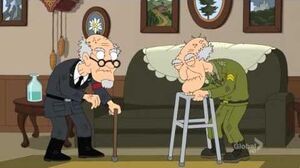