Frax is the secondary antagonist of Power Rangers: Time Force and a robot in the service of Ransik, responsible for constructing the army of robot minions that Ransik sends against the Time Force Power Rangers. A robot himself, he dislikes Ransik's belief that robots are inferior, as well as the mutant's habits of destroying his creations when he is angry. This rage goes unnoticed by Ransik for much of the series. Frax's arsenal consists of a claw arm that transforms into a hand-like missile launcher. He is the archenemy of Wes Collins, the Red Time Force Ranger.

He was voiced by Eddie Frierson and his human form was portrayed by Jeff Griggs.

When still a human, Dr. Ferricks is a handsome middle-aged man with glasses. He was only seen with a brown coat that has a black collar and sleeves and black pants with boots. He also wore a black fedora and black raincoat whenever he went outside, and carried a yellow umbrella.

As the robot Frax, Ferricks now has a robotic body which is primarily gold in colour (the colour likely due to being painted). He also wore a matching battle skirt and cape that vertically cropped in half, revealing the left side of his torso, left arm, and left leg that are crudely built and not covered by armour plates. Frax also possesses a robotic head that has a prominent chin and large crest, a pair of robotic eyes that can move to the sides with retractable mechanical eyelids and a mouth which enable him to show a psychotic-looking smirk (usually when mocking someone or excited).

Frax started out his life as Dr. Louis Fericks a scientist from the future that attempted to heal Ransik of his poisoning by Venomark, a mutant criminal who was later captured and placed in the X-Vault. It was he that provided the serum that Ransik must consume regularly to combat the poison; Ransik destroyed his lab and left him for dead in return. Dr. Frax only survived by rebuilding himself into a robot. Frax harbors deep resentment against Ransik for this.

Later in the series, Frax discovers the X-Vault, where the worst prisoners were contained. He releases many of them without Ransik's approval, including Venomark (an action that particularly angers Ransik due to their past history). As a form of revenge, he destroys all of his serum and runs away from Ransik. He begins constructing massive robots that run on powerful Trizirium crystals from Mr. Collins' lab. Frax created Dragontron and unleashed him onto the city nearly destroying the Power Rangers in the process.

In the finale, Frax is caught by Ransik with the aid of Gluto. Nadira, Ransik's daughter, comes to him after she begins to doubt her father's mission. Frax explains that the hatred and prejudice between humans and mutants is a vicious cycle, and he urges her to break it before being taken away and having his memory erased. He is then reprogrammed to obey only Ransik and to use his robot Doomtron to destroy his enemies. Wes is able to return and destroy Doomtron, with Frax inside. Ransik and Nadira find Frax afterwards. Ransik kicks Frax's dying body and calls him useless. Frax's face falls apart, he lays his hand down, and he dies moaning. Frax was dead. Nadira mourns him briefly, but quickly forgets him when she sees a baby in need. 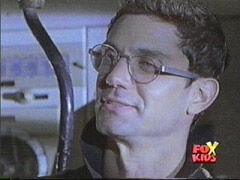 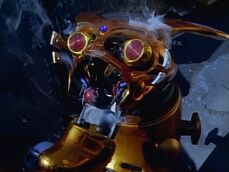 Frax's Demise.
Add a photo to this gallery

Retrieved from "https://villains.fandom.com/wiki/Frax?oldid=3982662"
Community content is available under CC-BY-SA unless otherwise noted.