The Freak Plant is an agent mutated by Professor Dordum into a plant monster. He is a recurring antagonist in Rebooting The Madness.

The Freak Plant was originally an agent wearing blue glasses stationed in a laboratory. When Edgar GunsForHands attacked the lab, the agent attempted to fend him off with dual axes. However, Edgar threw a glass test tube at his face, blinding him.

After defeating Edgar, Dordum gave the agent a pair of specs and stabbed him with a syringe, beginning the agent's mutation into the Freak Plant.

The agent was later shot by Newton Greenshades when he attacked the facility to save Edgar. However, the agent quickly recovered and threw an ax at Greenshades, injuring him. However, Greenshades was able to push him back with gunfire.

He soon returned now with several green tentacles sprouting from him. He attempted to attack Greenshades again when he was in the prison control room, but was again pushed back via bullets.He later attacked Edgar after he was freed, his head mutated and exposing his brain. He sprouted a gun from his head and attempted to shoot Edgar, but he was quickly taken down by Boomer shooting a grenade into his brain.

The Freak Plant was able to regenerate however, and he began siring plant mutants after the facility was blown up. He attempted to attack Edgar and Greenshades, but decided to avoid them after being shot at.

Since Rebooting The Madness 3 has not been released yet, we do not know the Freak Plant's fate.

The Freak Plant agent with specs 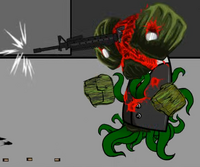 The Freak Plant wielding a gun from its head

Retrieved from "https://villains.fandom.com/wiki/Freak_Plant?oldid=3536457"
Community content is available under CC-BY-SA unless otherwise noted.