Show the Angry Video Game Nerd what it is like in a bad game.

Fred Fuchs is the main antagonist and final boss of The Angry Video Game Nerd Adventures, an indie game based on the Angry Video Game Nerd webseries. He might also be the main antagonist of the entire AVGN series, considering the reputation the titular Nerd gives him and how much of a surrealist comedy the series is. He later reappears during the review of Life of Black Tiger.

In the series, he was portrayed by Gilbert Gottfried who also voiced Iago in Aladdin.

Fred Fuchs is actually a real life movie/television producer known for producing the Bram Stroker's Dracula film and The Godfather Part III. When the Angry Video Game Nerd reviewed an old bad game based on the aforementioned Dracula movie, the Nerd was left aghast at the fact that, when watching the credits, that a man named Fred Fuchs produced said game. This is because the Nerd mistakenly assumed that the man's surname was pronounced "f--ks" (in reality, it's pronounced "fooks").

In the Angry Video Game Nerd Adventures, Fred Fucks sucks the Nerd and his friends into Game Land, a complement of terrible NES games, and forces them to play through it. At the end of the game, Fred Fuchs reveals himself the Nerd and serves as the final boss. After he is beaten, the Nerd escapes and Game Land is destroyed.

Fuchs is mentioned several times in the series, starting with the review of Dracula. However, he makes his first physical in-series appearance in the review of Life of Black Tiger where the Nerd tracks him down to the headquarters of 1Games located in the middle of Asian jungles. Upon tracking him down, Fuchs reveals that he's soaked his clothes in tiger urine and has made a company computer out of coconuts, bamboo and hyena feces. He then makes the Nerd to review the game further. He also claims that the ratings board rejected the idea of a sex scene between the titular black tiger and the female tiger present in the alpha build and that he's been urinated on by a stack of buffalo more times than he can remember. After finishing the game, the Nerd is forced to film a commercial featuring Mr. Rigs and Fuchs, ending the episode. 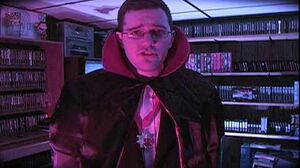 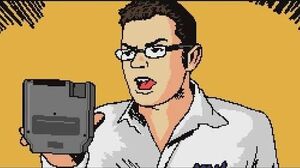