Fredbear is a major, yet mostly unseen antagonist in the Five Nights at Freddy's franchise.

He is a mysterious animatronic who was the mascot for Fredbear's Family Diner, the original restaurant. While he has made some form of appearance in different games throughout the series, he plays his first real antagonistic role in the game, Ultimate Custom Night. While Fredbear himself doesn't appear often, Golden Freddy, a ghost resembling Fredbear, shows up often in the games.

In Fazbear Frights #3: 1:35 AM, he is the main antagonist of the third story, The New Kid.

In the spin-offs, he's the deuteragonist of FNAF World and Freddy in Space 2, and a secret antagonist in Ultimate Custom Night.

Fredbear appears briefly in this game. He is seen performing on stage next to Spring Bonnie during Shadow Bonnie's secret mini-game.

A bit more of Fredbear's history is revealed in the series' fourth installment alongside the appearance of his "Nightmare" counterpart. He appears in a plush form during nightly minigames, trying to get a young boy (who the player controls) through the days leading up to his birthday at Fredbear's Family Diner. His animatronic form is also seen during the mini-games and the boy is shown to be scared of him. Because of this, the boy's older brother and his friends eventually shove him into Fredbear's open mouth before the animatronic's jaws clamp down on the boy's headm killing him.

Fredbear's "Adventure" counterpart is one of the playable protagonists, as well as the deuteragonist of this RPG and he is needed to achieve at least one of the games endings. His pixelated plush form also returns to assist the player in earning another ending.

Fredbear appears as a secret antagonist in the Ultimate Custom Night. To summon him, only Golden Freddy must be active during the night with his A.I. set to one. The player must purchase a Death Coin for ten Faz-Coins, which will made Freddy's top hat show up on the office desk, and then use it on Golden Freddy when he appears. Once this happens, Fredbear will instantly kill the player.

Fredbear returns as the deuteragonist. He is the one talking to the heroes after the player starts the level for the first time, helping them defeat L.O.L.Z.H.A.X.

Fredbear is a animatronic bear who looks almost identical to Freddy Fazbear but with slight physical differences, such as his LED eyes which are always exposed. He also has a golden yellow body, two black buttons on his torso and wears a small purple top hat with matching colored bow-tie. 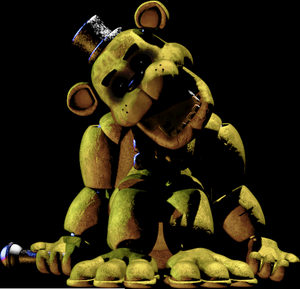 Golden Freddy, the animatronic which supposedly used to be called Fredbear 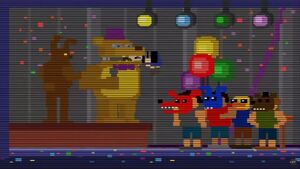 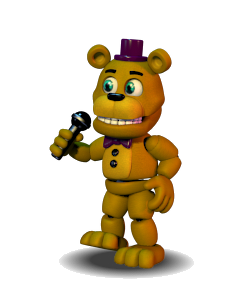 Fredbear in FNAF World.
Add a photo to this gallery

Retrieved from "https://villains.fandom.com/wiki/Fredbear?oldid=4067879"
Community content is available under CC-BY-SA unless otherwise noted.