Causing mischief
Charming people out of their wallets
Teasing AKs

Take over Auradon along with CJ (formerly)

Freddie Facilier is a major character in Descendants: Wicked World. She appears as the former secondary antagonist in the first season and a supporting protagonist in its second season. She is the daughter of Dr. Facilier and formerly lived on the Isle of the Lost before tricking King Ben into allowing her to live in Auradon.

Freddie is a sassy, sarcastic and witty teenager, who is a mischievous prankster (much like her former partner in crime). She originally saw the AKs as "lame" but eventually did open up to them and chose to remain friends with them instead of CJ. She doesn't take a lot of people seriously especially Audrey and Zevon not caring at all about anything she would say against her and not being intimidated by Zevon at all and openly mocked him, while everyone else took him extremely seriously (some even terrified of him). She shows most respect to Mal and Evie although occasionally still teasing and annoying the two. She can be mildly sadistic towards people's pain although this only if their pain is petty and not serious, like when Jay fell on top of Carlos while trying to escape Jordan's lamp winding him. Freddie is quite charming yet also rather cocky and at times arrogant, even after redeeming herself she still regains some of her mischievous ways yet she simply wants to have fun and not to annoy or hurt others. She is also a rather charming and charismatic individual which she most likely got from her father which is proven to be useful since she can easily manipulate others into doing what she wants.

Freddie is a pretty, slender dark skinned girl with greeny yellow eyes and black hair of which is in two waist length pigtails with grey detailing towards the bottom. She usually wears a short red dress with a spiked design towards the bottom along with a light purple waistcoat with gold buttons and detailing, a green feather over her collar, purple tights and black and white boots. She is always seen wearing a purple mini top hat with a blue feather in it on the side of her head along with white facial paint underneath her eyes.

In season one Freddie first appears in the episode Voodoo? You Do where she is on the Isle of the Lost working in a voodoo store presumably owned by her father where she is persuading Audrey to steal something. Mal notices her and requests to Ben that they should leave. In the following episode she appears taunting Mal and Evie then mocking Audrey and Ben, she then manipulates Ben into allowing her to go to Auradon Prep. After this episode Freddie appears to settle down in Auradon and regularly hangs around with Mal and Evie. She is revealed in Hooked on Ben to have smuggled CJ into Auradon and is her "partner in crime" after CJ treats her like a minion instead of a partner Freddie is annoyed at her and says she won't spend her life in CJ's shadow like she has had to with her father all of her life. CJ promises to be more fair and to actually treat Freddie as a partner. CJ however immediately goes back on her word and Freddie decides to redeem herself leaving CJ to flee.

Freddie is a far less predominant character in this series but does play a large role in the episodes Pair Of Sneakers, Options Are Shrinking, Trapped and United We Stand. In Pair Of Sneakers, she returns to the Isle of the Lost with Mal in order to assist her in finding her jewel for the Jewel-bilee by returning to her and her father's shop and begin their search. When they find nothing Freddie simply gives Mal a lucky necklace which she found, not knowing that it contained the jewel that would hypnotize her. She later appeared in Options Are Shrinking, taunting Zevon only to be shrunk and placed in Jordan's lamp along with Jay, Carlos and Jane. In Trapped, she attempts to escape along with the others but after a failed attempt by Jay and Carlos involving Jane attempting to use her magic and Jay falling on top of Carlos, Freddie giggled while making no further escape attempt. In United We Stand, she assisted in Zevon's defeat by destroying his enchanted puppets. In the finale she is brought back to her original size and presented her jewel. 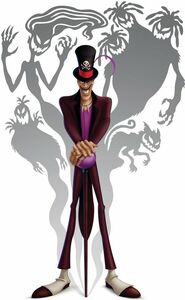 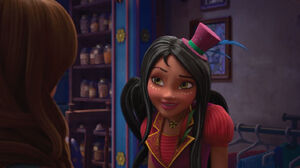 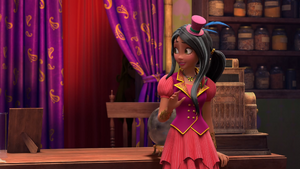 Freddie hiding CJ behind the curtains 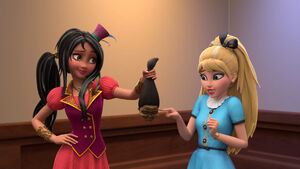 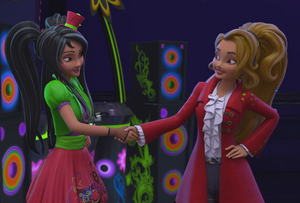 CJ and Freddie in season 1 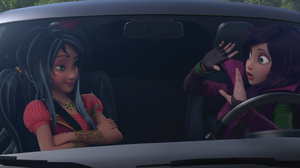 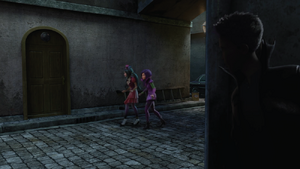 Freddie and Mal unknowingly being watched by Zevon 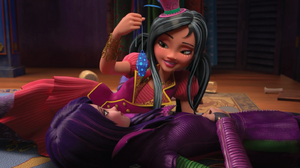 Freddie giving Mal a necklace which her jewel is hidden inside 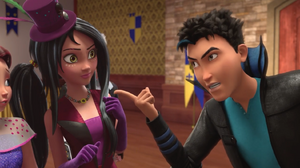 Zevon angry at Freddie for correcting him 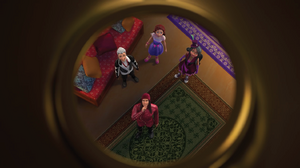 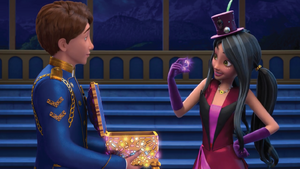 Retrieved from "https://villains.fandom.com/wiki/Freddie_Facilier?oldid=3547867"
Community content is available under CC-BY-SA unless otherwise noted.