Molesting children.
Invading and warping the dreams of the living.

Kill the children of all of the parents of Springwood as revenge for them burning him alive, on the parents behalf, and the children themselves for ratting him out (mostly succeeded, but ultimately failed).

Frederick "Freddy" Krueger, also known as the Nightmare, is the main antagonist of the 2010 remake of A Nightmare on Elm Street. He is based on his original incarnation with the same name.

He was portrayed by Jackie Earle Haley, who also played Braxton Red in Dollman, Rorschach in Watchmen and Odin Quincannon in Preacher.

Freddy was a gardener who worked at the Badham Preschool. He was liked by the parents and adored by the children, on whom he seemed to dote. However, he was merely using this façade to get the children to trust him enough to lure them down into his "Secret Cave" in the school's basement, where he would torture and sexually abuse them. His favorite victim was Nancy Holbrook.

Eventually, the children's parents discovered the scratch marks on their bodies (from Freddy's clawed gloves) and realized what Freddy was doing to them. Desiring revenge and wanting to spare their children the trauma of a trial, the parents ganged up on Freddy and prepared to kill him. Freddy ran into a nearby abandoned factory, and the parents locked him inside and set the building on fire, killing him.

Years later, Freddy returns as a ghost to haunt the now teenagers who told on him in their dreams to kill them.

Freddy is first seen following Dean through the diner where he pops out from a corner and slices Dean's hand open as he's dreaming. When Dean falls asleep again, he tries to stab Freddy with a knife which Freddy turns on him and makes him slit his throat.

Then, he goes after Jesse who falls asleep in jail. Freddy taunts Jesse a bit before shoving his arm through Jesse's chest, killing him. After that, Freddy shows Quentin what happened to him when Quentin falls asleep during swimming practice. Quentin begins to question whether or not Freddy truly was evil, to begin with, and was wrongfully accused. Nancy watches some videos online by Marcus Young who seems to be suffering from a nightmare about Freddy. In the final video, Marcus falls asleep and is killed via having his head smashed through the computer screen.

Then, Freddy goes after Nancy in a convenience store when she experiences micro-naps and he ends up slicing her arm but manages to pull a piece of his sweater out with her. Then, Quentin and Nancy go to the old preschool Badham, begin to remember what Freddy had done to them in his room and realize that he was indeed a pedophile as the kids said.

Later, Nancy falls asleep to get Freddy out of the nightmare. After a short fight with Freddy, Quentin injects adrenaline into Nancy and she wakes upbringing Freddy out with her. Freddy goes for Nancy first, but Quentin stabs Freddy in the leg to distract him and Freddy injures Quentin. When Freddy is distracted, Nancy slices off his claw hand and slits his throat with a broken paper cutter blade which it kills Krueger.

Then, Nancy and Quentin burn down the school and his corpse, thinking it is all over. But when Nancy gets home, Freddy appears behind Nancy's mom in a mirror, stabs her mother through the head include the eyes and pulls her into the mirror, causing Nancy to scream in horror.

Freddy appears in the game Dead by Daylight as a playable killer known as the Nightmare while Quentin Smith is a survivor. They both were brought by The Entity for them to play its game. The story for them is set after the 2010 remake with Freddy getting revenge on Quentin for him saving Nancy, with both of them ultimately entering the Entity's realm.

His power allows him to pull survivors into the Dream Realm, where he can manipulate the environment to create snares to catch them. 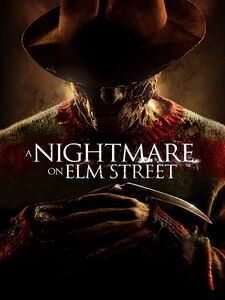 Freddy on a poster for the film. 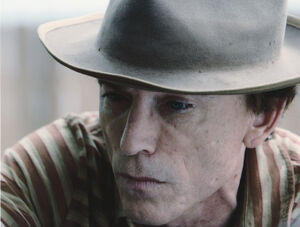 Freddy before being burnt. 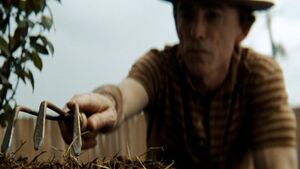 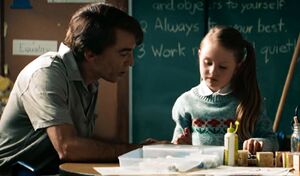 Freddy with a young Nancy.

Freddy running from the parents of the children he hurt and raped. 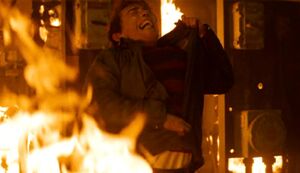 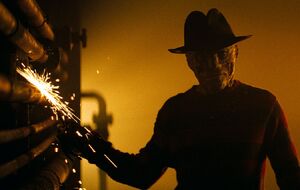 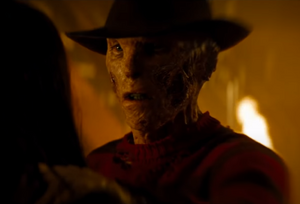 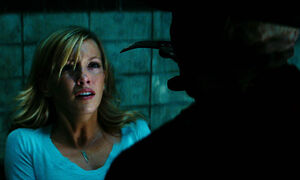 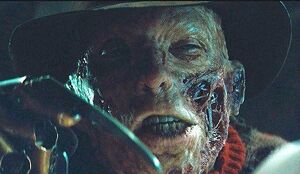 Freddy and Nancy in the alternate ending 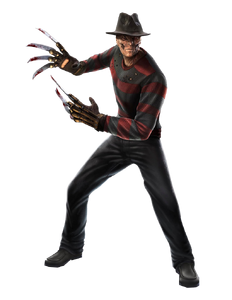 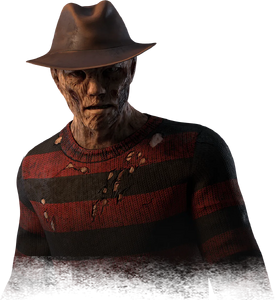 Freddy Krueger as The Nightmare in Dead by Daylight.