NOTE: This article is about the demon that possessed a British redcoat and assimilated his identity. The redcoat he possessed can be found here: Frederick Gideon.

Bringing misery and destruction to his opposition.

Surface from the Wellhouse to launch a mysterious crusade against man (in progress).

Frederick Gideon's Demon is one of two overarching antagonists (along with Dodge) in the TV series Locke and Key, serving as the unseen overarching antagonist of its first season, the overarching antagonist of its second season, and slated as the main antagonist in the third season. A vicious yet beautiful otherworldly entity, He is a British Captain active during the Revolutionary War and the first to discover the dimension behind the Black Door. He was possessed by a vicious yet beautiful otherworldly entity, and subsequently hanged by the law enforcers of Massachusetts Bay Colony, but not before leaving a message of Multiversal ramifications for his descendants to find. In the modern day, he was revived by the demoness possessing Eden Hawkins, who he promptly killed before proceeding to take up the Anywhere Key that could take him to any place in the world that he desired. His true name and identity are a mystery, having assumed his host's identity.

He was portrayed by Kevin Durand, who also played his host body in the same Netflix series, Mika in The Captive, Blob in X-Men Origins: Wolverine, Ricky in Real Steel, Setrakus Ra in I Am Number One, and Black Knight Ghost in Scooby-Doo.

This demon dwelt in a blue dimension during the waning days of the Colonial Period, during which time he gained a powerful reputation among other shadows, including Eden Hawkins, who came to reluctantly admire him, although he would not actually familiarize himself with her specifically. Somehow, their portal latched onto the Earthly Plane through the Drowning Caves in Massachusetts, and Gideon perched himself in a diagonal position in the form of an orange bullet to beam down upon any host body who would accept him.

During the waning days of the Colonial Period, a man named Frederick Gideon rose to his feet and stood spread-eagled before the dimension, allowing the prominent demon to manifest as a great bolt that surged onto the Earthly Plane and struck his bosom. His eyes blackened, his teeth filed to sharp bony blades, and his face emitted an exotically scaly overtone. Now having a fully willing host body, he lunges forward for one last stand with the Minutemen present in the caves, ultimately taking a bullet from Benjamin Locke, who had dishonorably snuck up on him from behind. Defeated, he roared and growled with fury.

Now at the mercy of his enemies, Frederick Gideon was chained up in the Wellhouse, which was often used for dissidents. In his imprisonment, he became a zealot, being fully avowed of what could lie beyond the Material Plane. He concealed his notes in a parcel that would eventually come to his descendant, Josh Bennett. The people of Massachusetts Bay Colony reached the verdict that Gideon would be sentenced to death for his unspeakable crimes. The hangsman administered the rope around his neck, at which point Benjamin Locke censured his lack of humanity. In response, Gideon foretold that this was only the beginning and that he was only the first that will come through the portal and seek global chaos. Benjamin brashly shushed him and told the hangsman to drop him by kicking aside the bench propping him upwards. His throat fatally tight against the noose, Gideon suffocated as the bystanders murmured tensely, grateful to see the threat of his dominion fade.

After two long centuries, Gideon's prophecies of retribution came to pass when the demon possessing Eden Hawkins responded to the exorcism of Dodge from Lucas Caravaggio by using the latter demon's Echo Key, one of a myriad of magical keys she owned, to unleash him from the void. The demon needed him to open the Black Door and summon more demons, potentially bringing Dodge back despite the demoness' mutual dislike of her. Disoriented, Gideon tried to leave, but Hawkins forbade him from crossing the threshold, proceeding to emphasize how only she knew of the deep magic and insisted he would give her no trouble. She expressed surprise and pleasure at recognizing him, but she also believed she was in a perfect place to be the one to give the orders. Uninterested in subservience to his liberator, he picked her up headfirst, so she demanded he put her down. Quite ironically, Gideon obliged, dropping her into the well headfirst to her death. He took up the Anywhere Key from where it was perched in the shed's wooden door, something Eden had been using despite her mutual dislike of Dodge, and smiled enticingly at the prospect of another demon claiming one of the keys as a potential part of Dodge's legacy. Gideon proceeded to leave through the storage closet and subsequently recover a notebook, possibly his old journal, and pore over its cryptic contents with two of his redcoats restored from beyond the void, presenting himself as their captain, but also something more than that. They eventually opened a second portal, emanating from the wooden floor of an unclear locale. He is currently in position of the Anywhere Key and the Echo Key.

Like all shadow demons, this one is a black astral humanoid with two small white eyes. His ravishingly and harrowingly beautiful host body has fair skin, platinum-blonde hair (though briefly brown when gazing into a horizontal portal glowing with blue light), and blue eyes. He speaks in a seductive voice that amplifies the firm and domineering voice of his host body.

The demon that possessed Frederick Gideon was a vicious misanthrope who maintained his host body's superiority complex and lack of mercy. Yet his intentions were also mysterious, and he always conveyed his thoughts in an extremely eloquent, charismatic, and utterly captivating fashion, making him just as beautiful as he is feral. Much like Dodge, another demoness who equaled his remarkable beauty and charisma, Gideon spoke highly of the righteous power waiting to be unleashed from behind the Black Door, being obsessed with reopening it. Unlike her, he appeared to be a savagely aggressive man of action without her subtle and analytical mind. Hence, he had no qualms about betraying Eden Hawkins despite knowing he was in the demoness' debt.

Wellhouse: Frederick Gideon was once chained in the Wellhouse on the Keyhouse Manor property, located directly above the Black Door and the Drowning Caves. He would be alarmed to see the Wellhouse again when Eden summoned him and tried to order him around, provoking him to righteously throw her headfirst down the well and proceed to escape the Wellhouse by means of the Anywhere Key.

Gideon tries to exit through the gate, but Eden warns against it.

Gideon is told of the threshhold.

Gideon is left to ponder the idea of an alliance with his superficial inferior.

Gideon realizes Eden has pulled him out of the void solely to be her slave.

Eden orders Gideon to leave with her.

Gideon makes up his mind. 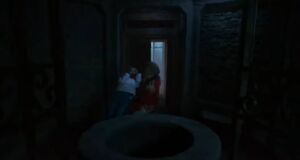 With a lovely yet feral snarl, Gideon grabs Eden. 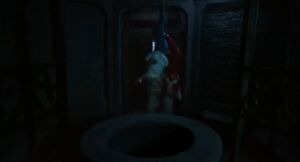 Gideon holds Eden up and over the well. 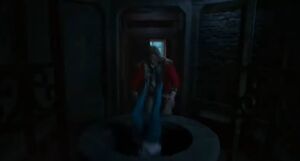 Gideon drops Eden to her death. 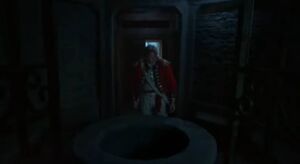 Gideon gleefully awaits a cracking skull resounding at the bottom of the well. 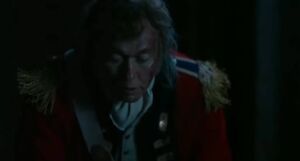 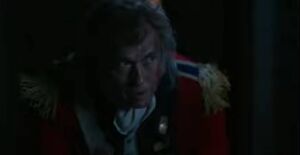 Gideon's eyes dart towards the top of the Wellhouse, curious of how far up the structure goes. 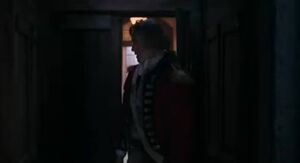 Gideon gets to his feet. 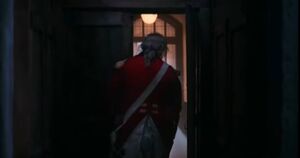 Gideon makes for the doorway. 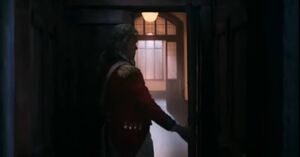 Gideon's arm extends towards the doorknob. 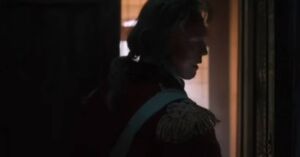 Gideon's eyes become readjusted to the prompt influx of light. 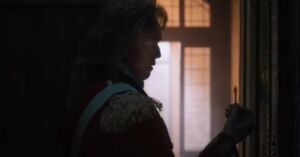 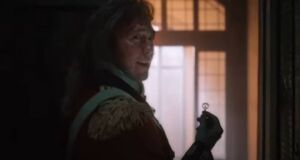 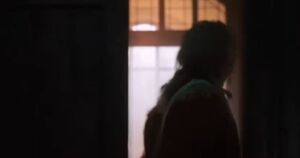