Villains Wiki
Register
Don't have an account?
Sign In
Advertisement
in: Mature, Male, The Boys Villains,
and 30 more
English

Use Compound V to create the first superhero to defeat the Nazis (succeeded).

Have the Third Reich replicated in America and create a legion of Aryan superhumans to exterminate all non-white races (ongoing; posthumously through his widow Stormfront).

Frederick Vought is the posthumous overarching antagonist of the Amazon TV series The Boys. He was the founder of Vought International and the man who created Compound V.

In the early 20th century, Frederick was a young geneticist who earned his medical degree in Munich. In 1939, Adolf Hitler chose Frederick as the chief physician of the Dachau Concentration Camp. At the camp, he was given access to use human subjects for his test his early prototypes of a manufacturing chemical Compound V. He later married Klara Risinger who became would the world's first successful subject of Compound V and had a daughter named Chloe Vought. In World War II, Frederick lost faith in the Nazis to win the war and sides with the Allied forces. His Compound V serum led to creating the superhero Soldier Boy who was able to defeat the Nazis, leading the Allied's victory.

After being pardon by President Roosevelt, Frederick went on founding Vought International and becoming an American institution. At some point, he wrote an autobiography omitting his Nazi past.

In the second season, when Homelander confronts Stan Edgar about hiring Stormfront (who is secretly Frederick's widow and hasn't aged as a result of the first Compound V injection) as a replacement for Translucent, Edgar asks him if he knows about the company's founder, Frederick. After giving him a summary of Frederick's past, including his history with the Nazis, Edgar explains that despite Homelander being a public superhero, Vought is not a superhero company but a pharmaceutical one and that the Compound V is the most valued asset within the company.

After Homelander and Stormfront enter a relationship, the latter reveals her previous marriage to Frederick and that Homelander is everything that Frederick dreamed of in other words his belief of a race of Aryan "Superheroes" that could combat the "threat" faced by other races, revealing that while Frederick defected to the Allies he still upheld the white supremacist Nazi rhetoric Hitler imparted onto him and his overall goal for creating the Supes was to create a White Supremacist Ideology society within America revealing that Vought only feigned supporting the US so he could enact a plan that would turn the nation into a carbon copy of Nazi Germany. 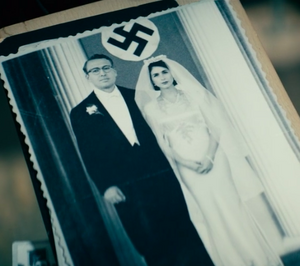