Minion of the Fallen Angels

Kill Rias Gremory and everyone else in Rias's club (failed).

Freed Sellzen is a recurring antagonist in the light novel High School DxD, as well as its anime adaptation.

He is a stray exorcist who first allied with the Fallen Angels in Raynare's plot to steal Asia's Sacred Gear until he betrayed her by leaving her to die at the hands of the Occult Club. He later Kokabiel's plan to start another war between the angels, fallen angels, and devils.

Freed is a young man with short white hair and red eyes. As a priest, he was dressed in clerical clothing and often had a disturbing smile on his face. As a Chimera, he had a massive body, thick arms and legs, and sharp fangs coming out of his mouth. He also had a single bat wing and an extra arm coming out of his back.

A battle maniac, Freed preferred violence over logic, spoke in a vulgar way, and was somewhat insane and psoychotic. He killed monsters and Devils for the sake of his own pleasure. He hates Devils. Freed was also shown to be a pervert, as he once threatened to rape Asia for disobeying him and even asked Raynare to have sex with him in exchange for saving her from Rias. He is also traitorous when Raynare failed to acquire "Twilight Healing", Freed betrayed Raynare by leaving her to die without a moment hesitation.

Freed previously trained at the same institution as Siegfried, and was considered to be a genius exorcist at the age of 13. Freed, however, did not believe in God from the start, as he only wanted to kill monsters. Eventually, he became a wanted criminal at the Vatican and was forced to run away, joining the Fallen Angels in the process.

He murdered Issei's client before attacking Issei who (at the time) was lacking any battle experience, and nearly killed, Asia screamed when he was about to kill her that interrupted him, he asked what she was doing. She protected him, she cried and begged him not to kill him. He was annoyed and slashed at her clothing. Issei told him not to touch her. He still got mad that she did not do anything with the barrier. Gremory Team arrived to save them. Freed aggressively hurt Asia for not doing anything with the barrier. When Issei, Yuuto and Koneko went to the abandoned Church to rescue Asia Argento, Freed reappeared in front of them, revealing that he was working under Raynare and battled the three of them before retreating after being at a disadvantage. After Raynare was defeated by Issei, Freed showed himself again with Raynare ordering him to save her but was rejected by Freed who then betrayed/abandoned her and retreated after proclaiming that he would be the one to kill Issei.

Freed shows up again, this time as Kokabiel's underling after they stole three of the Excaliburs. When Issei, Koneko, Yuuto and Saji formed a temporary alliance with Xenovia and Irina Shidou to destroy the Excaliburs, Freed showed himself to them, wanting to test the power of Excalibur Rapidly before retreating with Valper Galilei as Irina, Xenovia, and Yuuto chased them. After Kokabiel fended off Irina, gravely injuring the girl, Freed was handed the four Excaliburs: Rapidly, Transparent, Nightmare, and Mimic by Kokabiel, prior to them being fused together. Freed then used the Fused Excalibur to battle Yuuto and Xenovia but ultimately lost after the revelation of Durandal and was cut down. His body was retrieved by Vali Lucifer along with Kokabiel and was reattached by Azazel before he left the Grigori and joined the Khaos Brigade.

During his time in the Khaos Brigade, Freed's body was modified into a Chimera and during Rias and Diodora's supposed Rating Game, devouring Diodora's two Knights before being cut down by Yuuto in a flash and was killed.

As an Exorcist, Freed wielded a light sword and an exorcist gun which shoots special light bullets, both of which were extremely dangerous to Devils. During his alliance with Kokabiel, Freed wielded three of the seven Excaliburs: "Excalibur Rapidly", "Excalibur Nightmare", and "Excalibur Transparency", prior to them being merged with Excalibur Mimic in order to form the Fused Excalibur.

During his appearance in Volume 6, he had been transformed into a Chimera and had higher physical abilities than before. 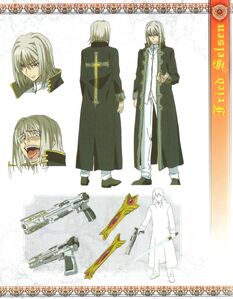 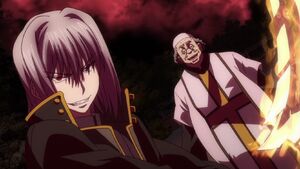 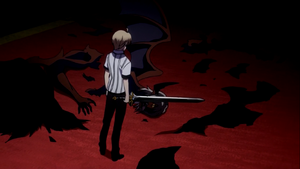 Freed after being hacked to pieces by Kiba (Freed's demise).
Add a photo to this gallery

Retrieved from "https://villains.fandom.com/wiki/Freed_Sellzen?oldid=4307230"
Community content is available under CC-BY-SA unless otherwise noted.