Freeman is a minor antagonist in Garou: Mark of the Wolves.

The man known only as "Freeman" is a well-known serial killer from Great Britain. Not only does he takes sadistic pleasure from killing his victims, he also loves to withstand pain himself. Absolutely nothing is known about his past or his identity. Freeman travels to Second Southtown upon hearing about the King of Fighters Maximum Mayhem tournament, hoping to find strong opponents to kill.

On his way to the tournament Freeman faced and killed various people, among them the partner of Kevin Ryan, which alerts the local police to his presence. After the tournament Freeman is hunted down by the police to an abandoned house near a river, where he is seen standing on the rooftop. He was shot by a sniper, falling down on the river, but his body was nowhere to be found. 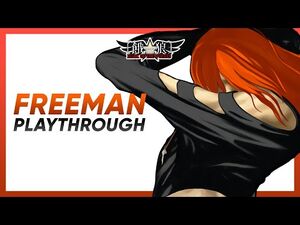