Secretary of the National Bureau of Defense

The Freeze Roidmude, originally Roidmude 001, also known simply as Freeze or 001 by other Roidmudes, is the central antagonist in Kamen Rider Drive, serving as the main antagonist in the third quarter of the series.

He is one of the 108 Roidmudes and among the first three created by Tenjuro Banno, along with 002 and 003. He would eventually rise up alongside his comrades against humanity. Unlike the other Roidmude executives, Freeze works behind the scenes and is seldom seen, with only Heart seeming to be in contact with him.

Freeze is the secret leader of the Roidmude uprising and works undercover in the Japanese government in his human identity of Soichi Makage, the head of Japan's Bureau of National Defense, to conceal all evidence of the Roidmudes' existence. Using his "freeze" powers, 001 erased all memory of the existence of the Roidmudes from the police.

He is portrayed by Masami Horiuchi.

Roidmude 001 was among the initial three Roidmudes created by Tenjuro Banno alongside his colleague, Krim Steinbelt, who had provided him with the Core Driviars. 002 was the first to be activated, having been forced to adopt a human form as Banno abused him out of spite. Witnessing to 002's pain, Krim condemned Banno's actions and walked out on the project. Out of spite, Banno proceeded to install negative human emotions into the Roidmude models, starting with the vacant bodies of 001 and 003.

Eventually, the Roidmudes rose up against Banno's abuse and the first three Roidmudes proceeded to murder Banno. Though it seemed that the scientist was killed by his own creations, in reality, his digitized consciousness was preserved and contained by the Roidmudes. 001, 002 and 003 then proceeded to the home of Krim Steinbelt to kill him as well. However, Steinbelt had his consciousness uploaded into the Drive Driver upon his death.

At some point, Roidmude 001 infiltrated the Japanese government in the human form Soichi Makage and was able to be promoted to secretary of the National Bureau of Defense, allowing him to establish a strong position in the political world. With his position, 001 used his powers to alter the minds of everyone in the police department so they would be unable to recall the word "Roidmude", hindering any future investigations into the Roidmudes.

15 years later, all 108 Roidmudes emerged and launched an attack on all of human civilization which would be known as the Global Freeze. 001 was among the Roidmudes assaulting Tokyo. They were stopped by the Shift Cars and Kamen Rider Protodrive. He was present when Protodrive announced to a fallen Mr. Belt that he had lost. 001 002 and 003 later brainwashed of Proto-Zero, alongside. Still with his human form's position, he was able to oversee the police activities and inform the other Roidmude Executives.

Months later, when Brain is at wit's end after being bested by Medic numerous times, 001 willingly accepted his call for help. He started by creating new models of Viral Cores called Neo-Viral Cores, which enabled the Roidmudes to evolve by fusing with the intended human allowing them to fuel themselves with their darker heart. He also assigns Mitsuhide Nira to look after the Special Investigation Unit so that he can destroy Drive (and Chaser) from within.

After Drive separated Sword from Hajime Taga with a SpeeDrop, resulting in the destruction of Sword's body, Roidmude 001 made his appearance and took Sword Roidmude's core as it was floating away.

With the knowledge of Freeze's true identity, Shinnosuke attempts to arrest Makage/001. Makage transforms into the Freeze Roidmude and attempts to erase Shinnosuke's memories centering around his Roidmude form but fails, due to Shinnosuke inheriting the same resistance as his father. With the help of a spiteful Nira, the Special Investigation Unit located the facility holding Freeze's victims in stasis. A battle ensued and Freeze battled Kamen Rider Drive until he was defeated by Drive Type Formula Mantarn's Trailer Impact. However, the defeat only intensifies his humiliation and he achieves the Super Evolution State, reconstructing himself into a new body. Using his newfound power, Freeze kills both Shinnosuke and Krim.

However, thanks to Shift Tridoron and the Special Crime Investigation crew, Shinnosuke and Krim are revived, angering Freeze. Freeze fights the revived Shinnosuke, now transformed into Kamen Rider Drive Type Tridoron. Drive's new form overpowers Freeze's Super Evolution and weakens. He is defeated when he is hit with a Trailer Impact from Drive Type Tridoron, destroying his body and sending his Core into the sea. Before dying, he resurfaces and said some chilling final words, he is not the one who claimed Eisuke Tomari's life, before his core explodes.

After the final battle was over, the spirit of the Freeze Roidmude appeared alongside the spirits of Sword Roidmude and Thief Roidmude to try and drag an injured Shinnosuke Tomari to the afterlife. All three of them were fought off and destroyed by the newly appeared Kamen Rider Ghost, allowing Shinnosuke to return to his friends.

Freeze is a highly intelligent mastermind, able to infiltrate the Japanese government and conceal all evidence of the Roidmudes' existence from behind the scenes. He is very pragmatic and does not generally involve himself in the conflicts between the other Roidmude executives, particularly Brain and Medic, instead staying focused on ensuring the Roidmudes' triumph over humanity and defeating Drive. He does not actively seek leadership and is content to allow Heart to lead the Roidmude uprising, seeing him as an ideal leader, while he works from the shadows. 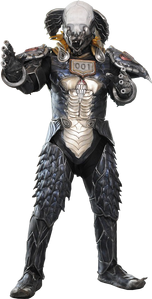