Make fun of King Arthur and his men.

The French Taunter is the main antagonist of the 1975 film Monty Python, and the Holy Grail.

He was portrayed by John Cleese, who also played the Black Knight in the same film and King Gristle Sr. in DreamWorks' Trolls.

The French Taunter is not exactly a villain in the traditional sense of the word but rather a very obnoxious obstacle that King Arthur and his men face when trying to get the Holy Grail - he was part of a group of French soldiers who have mysteriously arrived in England and taken command of a castle which they refuse to share: he is the loudest and most insulting of them all and despite King Arthur trying to reason with him simply treats them all with contempt and denies them entry.

Later, at the end of the movie, King Arthur and Sir Bedevere cross the Bridge Of Death to reach the Grail and discover that the Grail is in a castle across the ravine. When they approach it, they realize that the French Taunter is on the ramparts, implying that one of his earlier "insults" (telling Arthur that they already had a Holy Grail) was actually true. Arthur leaves and gathers an enormous army to attack the castle, however as they charge the modern-day police arrive, arrest Arthur and Bedevere for the murder of a historian who died earlier and shut down the film.

In Game of Thrones, the French Taunter's taunts can be heard in dialogue, albeit translated into Low Valyrian. 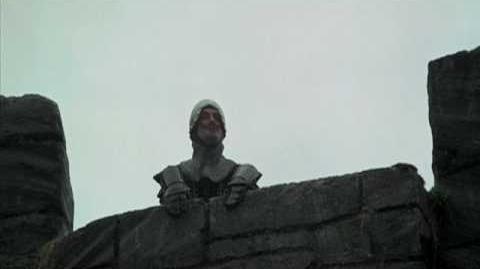 French Taunter
King Arthur and his men facing the French Taunter in one of the most unique villain confrontations ever.