Agent of the Perseus spy network

Originally a Norwegian Intelligence Service field agent, Freya would become an agent of the Perseus Spy Network after fearing that Scandinavia wouldn't survive a war. She joined the spy network, betraying the NIS and assisting Perseus in his plans to start a war against the United States. In 1984, Helvig worked with Vikhor "Stitch" Kuzmin in his plan to have Russell Adler brainwashed, detonating a nuclear device at a base in Mount Yamantau.

She is voiced by Michelle Viscusi.

Freya Helvig was born on February 29th, 1952 to unnamed parents presumably in Norway or Scandinavia, and according to her dialogue in-game, would go hunting. She was trained to hunt animals with a shotgun, and she notes that it's better suited to hunt reindeer with a sniper rifle. During the late 1960s and the 1970s, Freya became a student at the University of Oslo, where she majored in science. She would graduate with a bachelor of science in 1973, and then joined the Norwegian Armed Forces the following year. She continued to serve in the military until she was recruited into the Norwegian Intelligence Service in 1978, where she excelled in infiltration and sabotage. It's unknown if Helvig received the codename "Wraith" during her time with the NIS, or when she joined Perseus' spy network.

Around 1981, Freya was handling intercepts for the CIA at the Norwegian Joint headquarters when she discovered Perseus, a rogue Soviet spy who head of his own network. Freya became learn more about his spy network and plans, and joined his cause after seeing that Scandinavia wouldn't survive a war against the United States and Russia. It's unknown if she assisted Perseus during his attempt to detonate American nukes across Europe, which was thwarted by the CIA with aid from Perseus' former lieutenant, "Bell". Despite the failure of his plan, Perseus refused to give up and started to use his agents to start another attempt.

Perseus decided to enact his plan by having his agent, Vikhor "Stitch" Kuzmin kidnap Russell Adler, and have him be tortured and brainwashed to become a sleeper agent. Stitch then had Kapono "Naga" Vang torture Adler for information, and then had Adler sent to Verdansk to continue Perseus' plans. Wraith and Roman "Knight" Gray started to work with Stitch with his plan, and were tasked with infiltrating a base in Mount Yamantau in June of 1984. After eliminating the guards at the base, Wraith and Knight stole tapes that involved the brainwashing program started by Nikita Dragovich, who was killed during his attempt to start a war in the 1960s. The operatives then escaped the base and detonated a stolen "Greenlight" nuclear device, which would cause the United States to be blamed for the destruction of the mountain.

Though they succeeded in brainwashing Adler and the Verdansk test subjects, whom were put in place, the CIA rescue team saved Adler faster than they predicted. Stitch then reminded Wraith that the enemy satellites were interfering with their broadcast, preventing them from activating the sleeper agents. However, Wraith reminded Stitch that their man in Africa was prepared as Knight believed they had the advantage over the Americans. 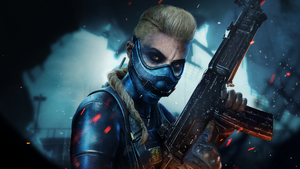 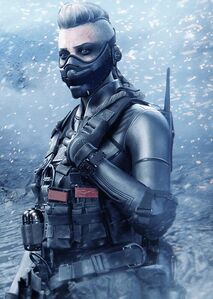 A promotional image of Wraith for Season 3. 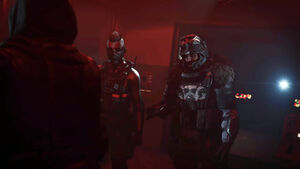 Wraith and Knight in the season three outro cinematic, speaking to Stitch.