Former Queen of the Valkyries

Marry Odin to protect her brother Freyr and the other Vanir (partially succeeded).

Help Kratos and Atreus with their journey (succeeded).
Protect her son from dying (failed).
Get revenge onto Kratos and regain her former Valkyrie powers (ongoing).

Freya is a supporting character and an anti-villain of the 2018 video game God of War. She is the Norse Goddess of Love, War, Beauty, Fertility, Childbirth and Magic, and the former wife of Odin and mother of Baldur. While not evil, she had committed morally dubious act by casting immortality spell on her son Baldur so he cannot die, but at the cost of his ability to feel anything out of twisted love for him.

During the main events of the game she aids Kratos and Atreus in their quest to reach Jötunheim, teaching them about the Nine Realms and helping Atreus with his illness and even helps Kratos come to terms with his muderous past. She also develops a maternal bond with the Atreus and becomes one of the only living beings Kratos genuinelly cares for. But the alliance is broken when Kratos kills Baldur to protect her from his retribution, only for Freya (still loving Baldur despite his attempt to murder her) to swear vengeance upon him. She also despises Mimir, Kratos and Atreus' companion, for indirectly causing her imprisonment in Midgard.

She was voiced by Danielle Bisutti, who also played April Harris in Beauty and the Beast, The Woman in White in Insidious 2, and Barb Pierce in Curse of Chucky.

Freya is the daughter of Njord, the Vanir God of the seas, and an unnamed mother, and is also the sister to Freyr. Being the leader of the Vanirs during their war against the Aesir, after years of fight, Mimir, Odin's advisor gave a solution for the fight between the two factions, Freya and Odin would marry each other, she agreed to marry Odin to stop the bloodshed, and bring peace between the two sides though she never forgave Mimir for doing that. In addition by this time, she had become the leader of the Valkyries, a group sworn to protect the realms, and lead the dead to Valhalla. With Odin, she showed him her magic, and he began to experiment; using it for unjust purposes.

She would have a child named Baldur, whom she cherished more than anything as her marriage to Odin became more strained due to her husband's greedy lust for knowledge. Learning of a prophecy that would kill her son, she decided to cast a spell of invulnerability onto Baldur, making him feel no pain from injuries. The spell worked to well, as he wasn't able to taste or feel anything, and demanded to have it spell taken away. Despite his plea, she stated that it couldn't be removed and told him that he would thank her in the long run, but he attempted to kill her before leaving in resentment. Baldur would continue to find a way to break the spell, as Freya lied to him on how to break it through mistletoe.

Eventually, Freya would break off her marriage to Odin due to his cruelty, and Norse Gods becoming violent, notably Thor killing giants mercilessly. Angered that the marriage was broken, he cursed the goddess to never be able to leave Midgard or harming any living creature. In addition, he took away her wings, leaving the Valkyries to deal with Odin and later become corrupted. This event was not taken well by others, who saw that Freya had a warrior spirit, as she was left in isolation.

Before breaking off her marriage to Odin, Freya was told by the guised as a mortal jötunn Hrimthur the secret weakness in Asgard walls that he put, in preparation for the downfall of the Aesir in Ragnarök.

Despite being alone, Freya would befriend Chaurli, a giant turtle where she would reside near the Lake of the Nine. In addition, she also befriended a boar that was actually an amnesiac God who was stuck in that form.

Initially, Freya is very friendly and hospitable towards Atreus and even towards Kratos, despite the latter's open distrust of virtually everyone and hatred for godly beings. It is implied that Freya sees herself in Kratos and that this is why she decided to help him, although she also teases "or maybe I just like you".

It is unknown which of these answers is true, but she is shown to care for Atreus, both as a friend and as a mother-figure of sorts. She occasionally scolds Kratos for keeping his past a secret from Atreus, and for distrusting divine beings despite being one himself. However, she understands his distrust due to the past actions of divine beings like the Aesir. She possibly reminded Kratos of Athena, which was why he was reluctant to trust her at first and not open with her as well.

However, like other villainous/morally dubious deities in the series, Freya has a darker side which made her worse than she appeared to be. Behind her maternal side is a selfish, vindictive being as well as representing the worst of manipulative and narcissistic parent. When hearing of her son's fated death, she placed a curse on him that would make him immune to death and pain, yet cut him off from all his other physical sensations, all to feel secure in knowing Baldur wouldn't die. Even after Baldur begged her to lift the curse and seeing the agony her son was in, she refused, even claiming that there was no way to lift the curse. This selfish mindset of willing to put her son's life over his happiness caused him to endure over a century of agony. While she mostly hid these worst side of hers hidden from her allies Kratos and Atreus, the father and son notice this when she shown panic upon the sight of a number of mistletoe Atreus carry and later, seeing an illusion of Baldur's sad history with Freya at Helheim in which Mimir had trouble in recalling the full story about it.

This is because Freya placed a discrete spell on Mimir when she resurrected him, preventing him from speaking about Baldur's weakness and of her connection to him. Even when admitting to Kratos that she let her needs and fears come before her son, she still refused to change herself or lift the spell, and when Baldur was finally able to feel again, while he was euphoric in regaining his senses, Freya was horrified that the spell was broken, not caring that her son was happy to feel again. In the end, Freya's greatest desire was to keep her son alive, never feeling even a sliver of remorse for her actions or apologizing to her son despite seeing how much Baldur suffered and unable to truly see her own errors, not even with Baldur's attempt to kill her.

Kratos eventually resorted to kill Baldur in order to save Freya, earning Freya's hatred in the process. She swears vengeance against Kratos for killing Baldur, even though her son was hellbent on killing her and would have forced Kratos to kill him anyway right afterwards. She was perfectly willing to sacrifice herself if it meant Baldur would live, something that Kratos himself understands.

She scolds Kratos, calling him an animal and saying he will never change, inspiring Kratos to tell his terrible and murderous past to Atreus. After picking up her son's body, she looks back at the two, hinting that despite her hatred for Kratos, she respected him for admitting his past, and at least hopes that his child will not meet the same fate as his own.

With the intent of reclaiming her Valkyrie powers, it is clear that Freya has not given up her drive for vengeance and she may never let it go. 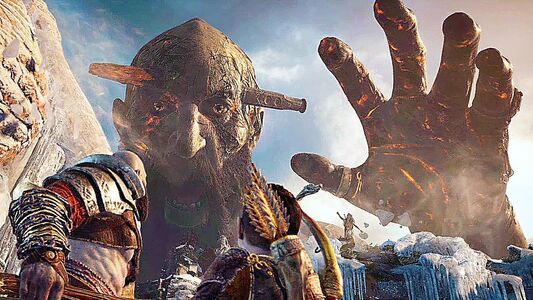 Freya defending her son from Kratos and Atreus.

Freya being strangled by Baldur. 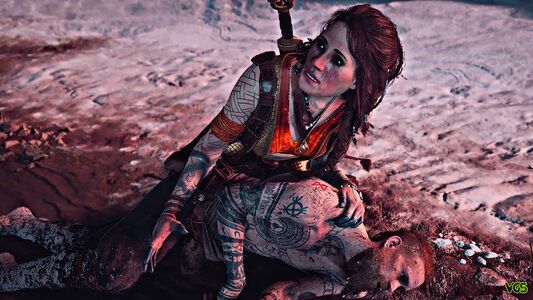 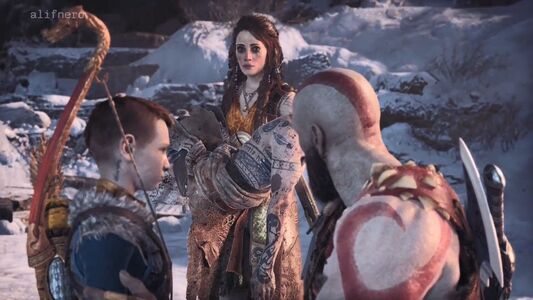 Freya seeing Kratos reveal the truth of his past to Atreus.

Retrieved from "https://villains.fandom.com/wiki/Freya_(God_of_War)?oldid=4251700"
Community content is available under CC-BY-SA unless otherwise noted.