Freya of the Frost
Queen of Winter

Queen of the Northern Kingdom

Training the children of her subjects to become her huntsmen.
Conquering all northern kingdoms beyond her own land.

To destroy all love (succeeded, but then abandoned and undid when she found out what really happened)

To obtain the Magic Mirror and resurrect Queen Ravenna (succeeded, but then Ravenna turned on her when Freya found out the truth behind how she lost her child).

Freya is the central antagonist turned supporting character of the 2016 film The Huntsman: Winter's War. Her siblings are Queen Ravenna and huntsman Finn.

She was portrayed by Emily Blunt in her first villainous role, who later did the voice of Commander Tempest Shadow in My Little Pony: The Movie.

Freya was the younger sister of Ravenna and Finn whom she left to new life with a man she loved and had a child. Although the man was promised to another, he send a letter to Freya calling her to the palace garden where he claimed they would be married in secret. However, it was a ruse to separate Freya from her child and when she left for the garden, the man (supposedly) killed his illegitimate daughter.

Realizing what happened, Freya rushed back to her chambers where the palace guards had already captured her lover. Overwhelmed by her anger and grief, she unleashed the magic hidden inside her and froze the man where he stood, killing him when he fell to the ground and shattered. After the death of her baby, Freya gained the power to summon ice upon rage. Freya then left her family to conquer a kingdom for herself, planning to raise an army as she was prevented from raising a child. Her man sacked the villages and her subjects feared her. With her magic, Freya turned the farmlands of the north into a frozen waste, reigning from an ice fortress. She also sent her men to capture children who she intended to turn into her personal huntsmen.

When children from a raided village are brought before her, she addresses them and tells them that they are lucky to be with her. When one of the children reveals that he misses his mother, Freya grabs him by the chin and covers it in frost burn, claiming that in her kingdom there is only one law - do not love. She then turns to the other children, exclaiming that she has freed them of the weakness of love by taking them from their homes, and that she demands their loyalty in return. The children are then brought outside where they are trained to become her elite huntsmen. Freya supervises their training by use of her magic, seeing the potential in the children Eric and Sara.

Eventually, Freya sent her army against the other kingdoms in the North. Her huntsmen, now grown up, are victorious.

Through use of her magic, Freya finds out that Eric and Sara are having an affair. Seeing this as a personal betrayal, she confronts the two as they are about to flee her palace. She gives the two the chance to flee if they are able to defeat the rest of the huntsmen from their village.

Although they succeed, Freya then separates the two through an ice wall she creates and, unbeknownst to them, uses magic to show both images through the ice to torture them physically. Eric sees Sara stabbed by another huntsman and Sara sees Eric running of and abandoning her. Both believe the things they see to be true. Another huntsman then knocks out Eric and Freya orders her guards to take the body out of her sight. Sara is imprisoned in Freya's dungeon. Although Eric is thrown into an icy river, he survives. Seven years later, he has assisted Snow White in killing Ravenna.

When the Magic Mirror is stolen, envoys from Snow White employ Eric to return it. Through her ice owl spies, Freya finds out about it. Although Eric sees and destroys the owl, Freya is now aware of the missing mirror and plans to obtain it to use its power to 'free' every child in the world and turn them all into huntsmen. She sends her huntsmen out to retrieve it.

After Eric and his group have found the mirror, they are approached by the complete host of Freya's huntsmen as well as Ravenna herself who arrives riding on a wolf-like creature. She reveals that Sara only joined Eric again because she ordered so, and that Sara has laid waste to kingdoms on her order. Freya then freezes two of the dwarfs who joined in with Eric.

Freya's men take the mirror and the two frozen dwarfs and Freya orders Sara to finish of Eric. Sara shoots an arrow into Eric's chest but deliberately doesn't hit the heart, allowing Eric to survive. She and her army then return to the north. Back in her fortress, she orders the dwarves brought to the gallery and the mirror brought to the sanctum.

With the mirror, Freya successfully revives Ravenna. Ravenna tells her that with Freya's army, she will reclaim Snow White's kingdom. Ravenna takes control over Freya's huntsmen, angering her deeply. Ravenna nonetheless gives new orders to the huntsmen, calling it a far superior tactic. She also reminds Freya of what she owed her and tells her not to question Ravenna's superiority.

Freya then addresses her huntsmen, preparing her for the war to come. However, despite her usual self she seems uncertain. During her speech, Eric, who has infiltrated her fortress, shoots a crossbow bolt at her. The bolt is caught by Ravenna. Sara then attempts to slay Freya but is stopped by Freya's magic. By reminding Freya of her law against love in front of all her huntsmen, Ravenna forces Freya to sentence Eric and Sara to death. The two are forced to kneel before Freya but the huntsmen turn on Freya instead of executing Eric.

The huntsmen are forced to fight against Ravenna, who kills Freya's men without a second thought. To protect her people, Freya creates an ice wall and separates Ravenna from her men.

Ravenna asks whether Freya has lost her mind, as she owes Ravenna who drained her from her weakness. From this, Freya realizes that Ravenna was the one who killed her daughter.

As Ravenna is still a part of the mirror, Freya forces her to tell the truth and is told that Freya's daughter was bound to become the most beautiful woman. Ravenna uses her magic to manipulate Freya's lover into killing the baby.

Freya and Ravenna then attack each other but Freya is overpowered. Ravenna fights Sara and Eric, giving Freya the chance to approach her from behind. Freya grabs her sister and embraces her, causing Ravenna to slowly freeze, but Ravenna impales Freya with her dark magic.

As Freya falls to the ground, Ravenna berates her sister for wasting the magic Ravenna unleashes in her by killing her daughter. Ravenna then fights against Eric. Seeing this, Freya uses her ice magic on the mirror, causing it to freeze. Eric then shatters the mirror, killing Ravenna. After witnessing this, Freya turns on the ground, seeing how Eric and Sara embrace each other. After telling both that they are lucky to feel such strong love, Freya dies. With her death, the frozen people from her gallery are released. 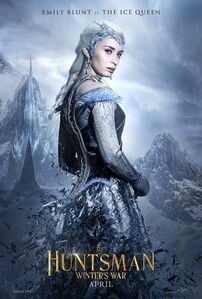 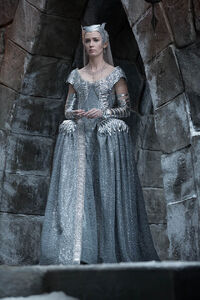 Freya is devastated after her daughter's death

Freya punishes one of the children 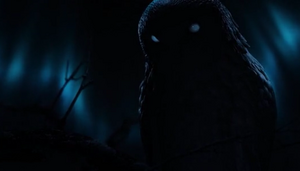 Freya, through an owl, spies on Eric and Sara

Freya watches through the eyes of her owl 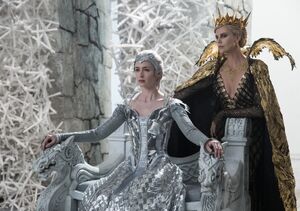